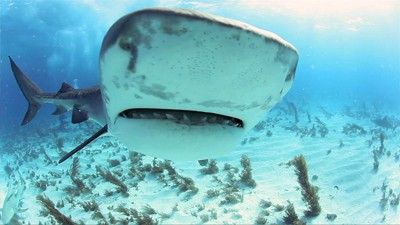 ST. PETE BEACH, FL— August 31, 2012—Legendary fisherman, artist and conservationist, Dr. Guy Harvey, will host a film festival at the Tradewinds Island Grand Resort on Saturday, September 15, 2012, in conjunction with the Gulf of Mexico Fisheries Symposium. Two of Harvey’s award-winning documentaries will be featured along with trailers for his upcoming films. Admission is free but parking is limited and will cost $5 per car. The first film with be shown at 7:00 p.m. with the second showing immediately following an intermission.

In 2011, Harvey’s documentary, This is Your Ocean: Sharks, won the Macgillivray Freeman Conservation Award at the Newport Beach Film Festival in California. It will open the Saturday night event. Also on tap for viewers will be Harvey’s latest film, Mystery of the Grouper Moon, which was filmed last year in the Cayman Islands.

“Grouper Moon is a very important project for us because it shows how science and art can work in concert to bring about responsible marine conservation,” Harvey said.

Mystery of the Grouper Moon focuses on a reef in Little Cayman where thousands of Nassau grouper congregate each February during the full moon. The grouper, which come to the same reef from miles around, are there for their annual spawning. Conservationists in Cayman persuaded the government to close fishing on the reef during the spawning season to protect the fish when they are vulnerable to mass catches by local fishermen.

“I have a lifelong love affair with fishing,” Harvey said, “and this film illustrates why there are certain times when we need to protect the species in order to have healthy and sustainable populations.”

This is Your Ocean: Sharks is a bit of a love affair as well between a man and a shark. The star of the film is Emma, a 12-foot tiger shark that has been befriended by famed scuba diver, Jim Abernethy. Conventional wisdom has been that tiger sharks are ruthless man eaters and historically they have been one of the most feared sharks. However, Abernethy and Emma formed a bond during hundreds of dives and they sometimes bump nose to dive mask in a heart-stopping show of affection. Abernethy likens Emma to a “puppy dog” and the film reveals how shark and man can peacefully co-exist.

The TradeWinds Island Grand is a 20-acre resort located on the unspoiled white sand beaches of Florida’s Gulf of Mexico, with extensive meeting space, five pools, fine and casual dining, beach bars and nearly limitless recreation for both adults and children.