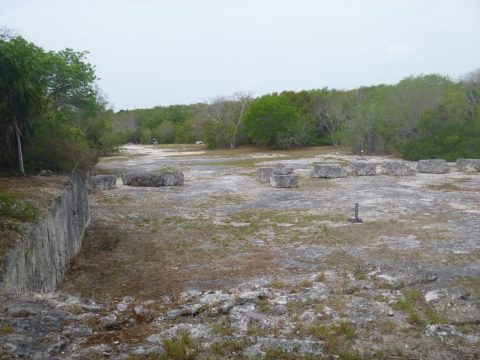 An Inside Look at an Ancient Coral Reef

Staring at the limestone wall surrounding Windley Key State Park in Islamorada, I can make out polyps of brain coral, tunnels dug by worms, and the filigree of sea fans– all while standing on dry land.

The park showcases portions of a fossilized coral reef that formed more than 125,000 years ago in the Keys. Now, following receding sea levels over the past 5,000 years or so, anyone can examine this once-thriving underwater ecosystem without even getting wet.

This ancient exposed coral reef became a homestead for the pioneering Russell family in the mid-1800s, then was sold to business tycoon Henry Flagler in 1908 for completion of the Florida East Coast Railway from Miami to Key West.  The land became a quarry to supply fill for the rail bed and bridge approaches and operated until the 1960s. It became a state park in 1999.

Walking the grounds behind the visitor and environmental center, I looked at the last big blocks of “keystone” ever mined at the site and the rusting hulks of equipment used to cut it.  It sort of reminded me of England’s famed Stonehenge site, except there’s no mystery surrounding how it got there.

Not only are snapshots of the lives of the prehistoric sea animals carved into the walls, but also in the rock beneath your feet.  Fan away the dirt and ground wasps on the trail and you will find yourself standing on yet more fossils.  There’s really nothing like it.

The prehistoric panorama in the rock walls and floors is not the only reason to visit Windley Key.  Five walking trails crisscross its 280 acres where you can admire native plants and trees (making sure to avoid the abundant poisonwood with sap that causes skin rashes), look at the remains of an old cistern and quarry building, and relax at a picnic table.

Park staff will provide you with a loaner trail map and interpretive guide that identifies and describes the flora and fauna you will encounter such as Jamaica dogwood, West Indian mahogany, gumbo limbo, and some 40 other trees.  And for $8, you can buy a slab of souvenir keystone at the gift counter.

By Sue Cocking, Guy Harvey Outpost staff writer scocking@guyharveyoutpost.com [Lakeport, FL.–]         It won’t be too long before scores of pontoon boats lit up like the Fourth of …