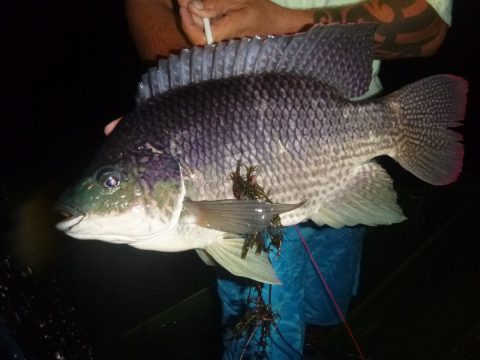 “Okay,” Holland told his brother Louis standing on the bow of the airboat wielding a compound bow with a nocked arrow.  “Get ready.  Wait for a broadside shot….wait, wait….okay NOW!”

Louis aimed low to compensate for the refraction of the water and took a shot from about four feet away.  The arrow’s stainless steel point nailed the target through the head.

“Great shot!” Skeeter complimented his brother as Louis reeled up a line attached to the arrow’s shaft then handlined it the rest of the way into the boat.

Louis proudly held up a seven-pound blue tilapia– a tasty, non-native freshwater fish from Africa and the Middle East that has made its way into just about every lake, pond, river and canal in Central Florida.

“Holy cow, that’s a big one,” Skeeter said.  He put it into a cooler beneath the helm and resumed scanning the cattail-and-lily-pad-lined slough.

Before Louis even had a chance to re-nock the arrow, Skeeter spotted another target in his headlamp.

“You ready?  Get ready!” he told his brother excitedly.

Over the next hour and a half, before intermittent thunder squalls chased the three of us back to the boat ramp at Harney Pond Canal, the brothers bagged 15 blue tilapia between about two and eight pounds.  Louis missed a few, but there were so many of them lumbering around the marsh that we never idled five minutes without spotting one and taking a shot.  Had the weather allowed more time, Louis easily would have filled the cooler.

Bow fishing is probably the most efficient method for harvesting tilapia because they rarely take a bait presented on rod and reel; the species feeds mostly on plankton and small organisms living on the bottom of lakes and ponds.  It’s common to see the fish sitting in their crater-like nests in the sandy bottom in daytime, but they are very skittish when approached.

At night, however, they roam around fearlessly–making them fairly easy targets from close range.

“At night, when you hit ’em with the light, some will run, but some turn up on their sides and say, ‘take a shot!'” Skeeter chuckled.

Skeeter, 32, has been bow fishing for tilapia since  his childhood  in Okeechobee. On his best night ever, he said he harvested 70. He says the free-ranging tilapia in the lake taste much better (and are obviously much fresher) than the farm-raised products sold in grocery stores and fish markets.

Since tilapia are not considered a gamefish in Florida, there are no bag or size limits, nor closed seasons.  Skeeter says they’re available on the Big O all year round, but can be difficult to locate on cold nights because they tend to move into deeper water.

You never know what you’re going to see when you are bow fishing for tilapia on Lake O at night.  On the night I hunted with the brothers, we saw numerous gators — their ruby eyes glowing in the headlamp. A five-footer even surfaced right next to the airboat. And tilapia aren’t the only fish you’ll spot milling around the marsh at night; we spied catfish, gar, bass, huge mullet, and mudfish (bowfin).

A lifelong outdoorsman, Skeeter is an avid bass fisherman, frog gigger, and duck, gator, deer, turkey, and hog hunter.  He recently launched his own guide service, South Florida Hunting & Fishing Outfitters (863-697-3588). Check it out for a fun day or night on the water or in the woods.

I Am Woman; Watch Me Fish

By Sue Cocking scocking@guyharveyoutpost.com Plenty of women would love to fish with their husbands and boyfriends, but feel intimidated because their partners don’t take time to explain what’s …