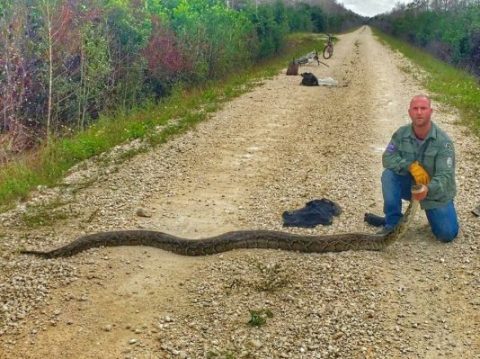 Tom Rahill, Barry Offenburger and I are scrambling over piles of limestone boulders and through thickets of Brazilian pepper and tangles of vines that stop us in our tracks and try to trip us.  It’s not a hot morning yet in the Everglades, but temperatures are on the rise following overnight lows in the 50s.  Perfect conditions for spotting Burmese pythons emerging from the woods to warm themselves in the sunlight.

Armed only with forked wooden staffs, we poke the bushes and crevices between the rocks but find nothing.  Frankly, I don’t know what I would do if I encountered one of the huge invasive snakes since I’ve never caught one before.

“Just use the forked end to hold it down, and scream ‘Snake!’,” Rahill advises me like it’s no big deal.

Rahill and Offenburger are very skilled and experienced python hunters.  Rahill figures he’s captured more than 400 since he started looking for them in 2008.  Offenburger estimates he has caught “in the 20s or 30’s” since 2012; his personal best measured 13 feet, 9 inches.

The two hunters met through Rahill’s informal, non-profit group known as the Swamp Apes; it’s made up of mostly U.S. military combat veterans who served in Iraq and Afghanistan.

Rahill, who never served in the military and works in information technology, wanted to create an all-volunteer labor force to clear trails and remove invasive species from South Florida’s wild lands.  Military vets, he decided, are perfect for the job because of their can-do, mission-centric mentality.

“I started taking veterans out there to take their minds off whatever’s bothering them coming back from their service,” Rahill said. “These young men and women trained by the military come back and get to use their training again in a very purpose-driven activity that’s benefitting the wilderness.”

Rahill, Offenburger and a couple other Swamp Apes are among only 25 bounty hunters chosen from more than 1,000 applicants for the South Florida Water Management District’s python elimination program that launched in late March and runs till June 1.  The snakes– native to Southeast Asia and brought to the U.S. for the exotic pet trade– pose a huge problem in South Florida’s Everglades ecosystem because they decimate native populations of birds, mammals and reptiles, including full-sized alligators and deer.   While scientists concede they probably can’t be completely wiped out in the Glades, directed hunts may help control their numbers.

The hunters are paid $8.10 per hour to scour the levees, woods, and marshes of district lands for the invasive reptiles, and receive $50 for bringing in pythons up to four feet and an extra $25 for each foot over four feet.  A bonus of $100 is awarded for a python nest with eggs.  The hunters’ work days are tracked through a smart phone app.

Offenburger, a U.S. Army vet who served in Afghanistan, is one of the program’s more successful hunters.  He killed three in the first week, including a 13-footer.  He’s been hunting snakes since his childhood in New Jersey, and “to get to hunt as an adult is a lot of fun,” he said.  “The past three I’ve caught are the first ones I’ve ever killed.  I do feel bad.  They’re beautiful animals, but it’s unfortunate that they’re here.”

Python hunting, or “pythoning” as Rahill calls it, makes looking for needles in haystacks seem like a cinch.

“It’s super difficult,” Offenburger said.  “The Everglades is such a vast open area and they are spread out and super-camouflaged so they can be really hard to find.”

As we alternated between scanning a dirt road and poking through the boulders and sawgrass that lined it, Rahill said, “we are probably walking past them right now.”

We patrolled the Glades from just south of Tamiami Trail to the edge of Everglades National Park near Homestead for more than eight hours by truck, on foot, and in a kayak without finding a single python. The only snakes we turned up were a dead king snake that got hit by a vehicle and a feisty green water snake that coiled angrily when I snapped a flash photo of it, then tried to bite Rahill’s boot as he moved it out of the road.

At dark, I gave up and went home.  But Rahill continued south to the Aerojet canal and hunted into the night.  Both he and Offenburger were back at it the next morning.