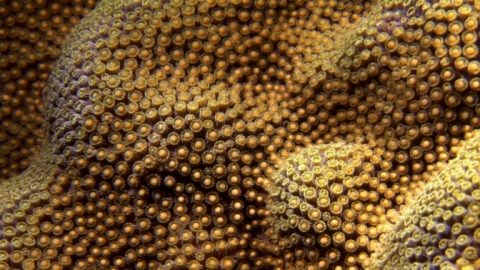 If you have ever wanted to take a night dive, the evenings of Aug. 26 and 27 will be the best time to take that plunge.  For those are the nights that scientists predict millions of boulder corals will do the wild thing in the warm, shallow ocean waters of the Florida Keys.  Your host for this spectacular annual underwater peep show is Captain Slate’s Scuba Adventures Dive Center near Islamorada, a Guy Harvey Outpost Outfitter.

Almost every year about a week following the full moons of August or September (the first of which falls on Aug. 18), coral polyps spontaneously release millions of bundles of eggs and sperm usually in the middle of the night.  They look like tiny white BBs shooting out into the water column, and eventually they become fertilized and settle to the bottom to form new coral colonies. But before they can settle, the swirling masses of gametes attract small baitfish and eventually larger fish such as tarpon that flash and slash around trying to eat them.  It looks a lot like an underwater fireworks display or lightning storm– a phenomenon first observed in the Keys in the early 1990s and that you don’t want to miss.

However, like anything in nature, coral spawning events can be unpredictable because they depend on an array of cues including water temperature, tidal cycles, and light levels and sometimes they don’t happen at all.  Whatever. Stick around and explore the Keys’ beautiful coral reefs in daytime and perhaps catch some spiny lobsters to eat.

Go to the Guy Harvey Outpost web site now to plan your adventure.