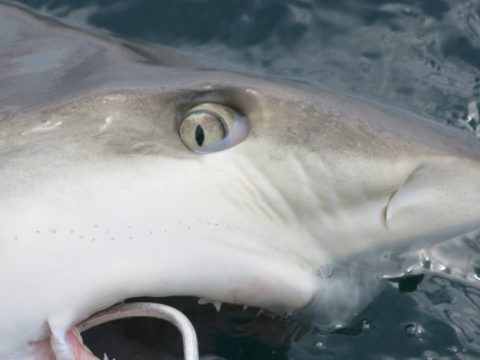 Caitlin Johnson has long held a keen interest in sharks, but what really sealed the Monarch High School senior’s resolve to study them in college was a research fishing trip she took with scientists from the Guy Harvey Research Institute at Nova Southeastern University near Fort Lauderdale.

“I actually pulled in two sharks we caught that day,” Caitlin said. “I think they’re really beautiful, really peaceful creatures.  I think they’re being beat down a lot.  I want to go to college to fix that, to spread the word around because most people don’t know.”

Caitlin went on her second research trip in September– along with 24 junior and senior classmates and four teachers–where they helped GHRI research scientist Dr. Derek Burkholder catch, tag and take samples from two sharks– a nurse and a Caribbean reef in the waters off Broward County.

The sharks are among about 200 tagged locally during GHRI school and public outreach trips conducted over the past three years.  Just a handful of tags have been returned, which is typical.  But with a couple more years of data, Burkholder said, scientists will have a better picture of the animals’ growth rates, species composition, migration patterns over time, population dynamics, genetics and diet.

As he explained to the students:  “It’s important we get an understanding of where they’re moving so we can protect them.  Sharks worldwide aren’t doing that well.  The main reason is us. Over 100 million sharks get killed every year by people.”

Some of the students gasped audibly when they heard that number.  But they were all about to become part of the solution.

Burkholder and colleagues Jeremy Vaudo and Erin Magee split the teens up into groups of five and showed them how to deploy drum lines to catch sharks in depths from 25 feet to 100 feet of water.  On each line, the kids baited a 16/0 circle hook with a large chunk of bonito on a 100-foot section of 900-pound-test line.  Once the baits were put down, the line was shackled to a 50-pound weight which was dropped overboard with a large, red buoy to mark its position.

“Great job, everybody!” Burkholder told the group after the deployment of the first set of ten lines.

While the baits were soaking, the young field researchers cooled off in the water behind the boat.  After about an hour, they began hauling back the lines. The first couple of lines held baits mangled by crabs.  But the third retrieval produced a very feisty six-foot female Caribbean reef shark that splashed and dashed and got everybody who was standing on the dive platform wet.

Eventually, Burkholder wrangled it close enough for Vaudo and Magee to secure it in the water with a tail rope.  Then it was up to the students to do the tagging and sampling.

One used a leather punch to open a hole in the shark’s dorsal fin while another inserted a plastic tag.  They took scrapings of tissue from the back side of the dorsal and swabbed the gills for bacteria. They also took multiple measurements.

“This is SO cool,” one young woman said to her classmate.

Everyone got a photo posing next to the shark before it was released.  It swam quickly away.

“I think all the science teachers agree it’s a lot more fun to do science than sit in a class and read science,” said teacher Kirsten Knowles.

Not long after the first shark was released, the students found the 6 1/2-foot female nurse shark on the end of one of the lines.  Much more subdued than its counterpart, the nurse was easier to sample and the operation went much more quickly.

Burkholder said the shark trips have become very popular; GHRI conducted 39 outings for students and members of the public last year, with 45 trips scheduled through June 2017.