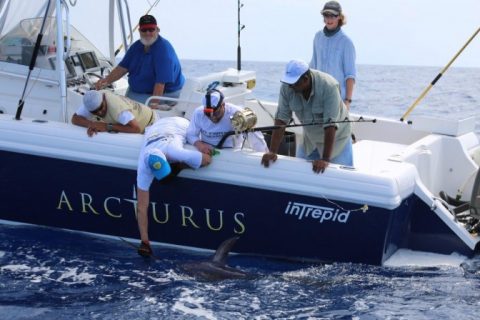 Pssst!  Do you really want a shot at winning the offshore division of the Guy Harvey Outpost Blazing Mako Tournament and Festival June 16-19 in Islamorada?

Hint:  charter one of the best all-around sport fishing guides in the U.S.– captain Bouncer Smith.  There’s only one way to do that: enter your bid in our ONLINE AUCTION. The winning bidder’s party of up to four anglers will spend the tournament day of June 18 with Smith and his first mate captain Abie Raymond on Bouncer’s Dusky 33 releasing billfish and weighing dolphin, kingfish, wahoo, and tuna for cash and trophies.  Proceeds benefit the scholarship fund at Nova Southeastern University’s Halmos College of Natural Sciences and Oceanography through the Guy Harvey Ocean Foundation.

“I think our primary goal would be targeting dolphin and any billfish we can find– white marlin, blue marlin and sailfish,” Smith said.  “June is prime time for dolphin fishing and a great time for the other species.”

Under tournament rules, a team garners 200 points for each sailfish release and 300 points for white and blue marlin releases.  Five points per pound will be awarded for the aggregate weight of three of each of the funfish species: wahoo, dolphin, kingfish, and tuna.

Smith readily discusses his tactics for racking up points, so pay attention. 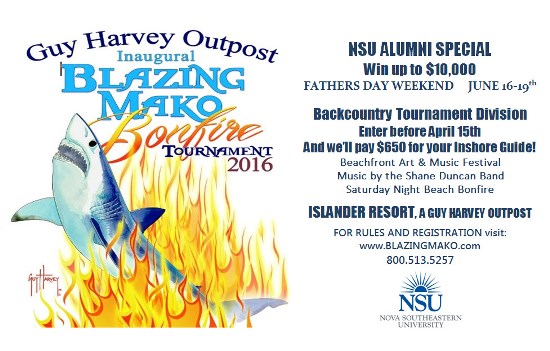 “We will make sure we have big goggle eyes and blue runners which give you the possibility to cast to a big fish,” he said.  “Pilchards for the fun of catching schoolies.  Our primary gig will be pulling large teasers and trolling with rigged bally hoo and, of course, searching for birds — predominantly a search for frigate birds and sooty terns.”

Frigate birds, also known as man o’war birds, tend to swoop down from on high upon spotting large fish chasing bait to the surface.  Sooty terns hover close to the water, staying over one area where a big fish is feeding.  Smith said the biggest fish are found where the birds are facing against the current.

“If the birds are going with the current, they’re over small fish or blue runners,” Smith explained.

Upon checking off the dolphin and billfish components, Smith says he’d head inshore to the reef and fish with goggle eyes and blue runners in 150-250 feet of water for kingfish, tuna and wahoo.

You really need to get in and bid on this if you haven’t already.

Smith said he would have entered the Blazing Mako tournament whether he was being auctioned off or not.

“It’s gonna be a lot of fun,” he said of the festival’s signature event– a metal mako shark sculpture being set on fire at the beach at the Islander, a Guy Harvey Outpost resort. “The burning fish parties are phenomenal. Stick around until it’s a glowing fish because that’s the grand finale of it all.”