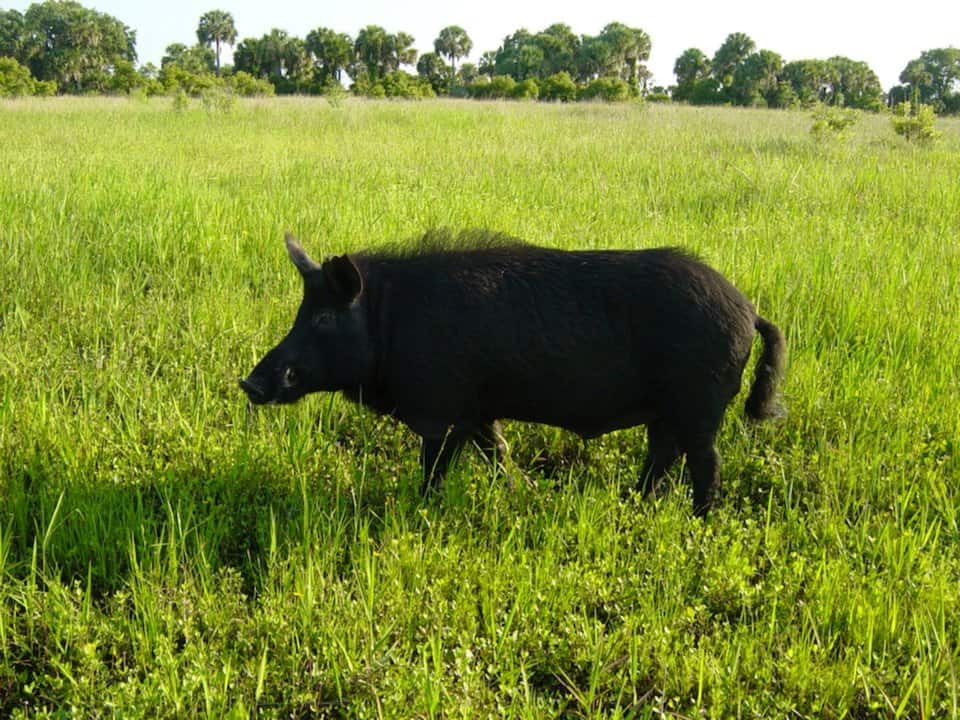 [Okeechobee, FL.–]    Todd Dupuis–a lifelong hunter from Ontario, Canada–has killed bear, deer, moose and other game animals for sport and food.  But he had never before taken a wild hog, and it was on his bucket list.

Facing a health scare, the safety management consultant decided to take a break a few weeks ago and drive with his wife and four-year-old son Nate to South Florida for a long weekend.

When he got to West Palm Beach, Dupuis learned about a small hunting operation just north of Okeechobee that specializes in wild hogs called Little Lake Lodge and decided to book a trip.

“We see it on the TV shows in Ontario,” Dupuis said of hog hunting.

Wild hogs– also known as wild pigs, wild boars or feral pigs– are not Florida natives.  They are believed to have been introduced to the state by Spanish explorer Hernando de Soto as early as 1539.  Since they are not designated as a game animal in Florida, they can be hunted year round with no bag or size limits.  Wild hogs will eat just about anything, and they are notorious among farmers and ranchers for rooting up pastures and crops to sniff out food. Many landowners pay trappers and hunters to get rid of them.

Dupuis was excited.  Gesturing toward his son, he said, “A chance to come somewhere like this…..it’s about making memories for him.”

Dupuis and Nate boarded a towering, lumbering swamp buggy designed to navigate the 1,100 acres of flooded, muddy pasture that make up the hunting grounds with their guide Troy Salisbury.

Departing the lodge, Salisbury deployed a pig-pointing secret weapon– a small brown, black and white dog named Pepper.  Splashing through puddles, sniffing the air and darting to and fro, Pepper got way ahead of the buggy in her search for swine.  But the hunting party heard her excited barking in the distance, and Salisbury sped up.

As they drew closer, Pepper began to howl.

“Hear her howling?” Salisbury said to Dupuis.  “She’s got him stopped and she’s looking right at him.  We’ll pull up there and I’ll holler at her and then say, ‘shoot!'”

Sure enough, the buggy rounded a bend in the pasture where Pepper had zeroed in on a stand of thick cabbage palms, wagging her tail and baying.

Suddenly, a black boar about 90 pounds dashed out of the bushes and headed across the field with Pepper in close pursuit.  The hog paused when it reached a barbed wire fence and Salisbury called Pepper away.  She edged away reluctantly.

The hunter aimed his rifle and fired, but the shot was high and only grazed the coarse hair on the hog’s back. It barreled down the fence line out of range.

Salisbury accelerated the buggy and caught up with the hog, and Dupuis got an easy shot, downing his quarry.

The party headed back to the lodge where Salisbury hoisted the hog up on pulleys and dressed it.  Dupuis said he would take the meat to a processor in West Palm Beach to be turned into ham steaks and bacon for the Christmas holidays.  The memories, however, would be around long after the meals were gone.

By Sue Cocking, Guy Harvey Outpost staff writer  scocking@guyharveyoutpost.com A beautiful fish with a very ugly face.  Slippery and slimy but tasty to eat. A feisty sport fish but a nuisance exotic. …