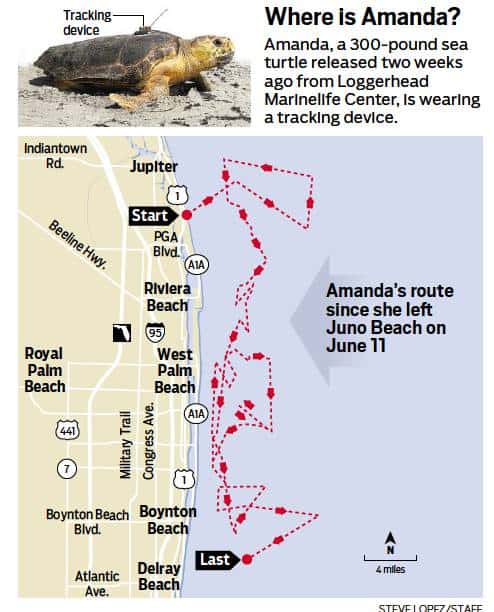 Amanda’s zig-zag route might look like she’s one confused sea turtle, but experts say the 300-pound loggerhead knows what she’s doing. “Her path is what we expected. She’s making a loop to get her bearings,” said Charlie Manire, director of research and rehabilitation at the Loggerhead Marinelife Center.

Since being released into the Atlantic Ocean from the LMC in Juno Beach on June 11, Amanda as of Tuesday has criss-crossed her way a little bit north and a lot south. That’s close to 180 miles, or about 14 miles a day.

She was last detected swimming a few miles off Delray Beach, according to seaturtle.org.

Amanda swam north about 5 miles, and then headed about 10 miles out to sea.

She then headed south and swam around between Juno Beach and West Palm Beach, less than 10 miles offshore.

For the past few days, Amanda has been meandering south, Mani-re said.

“She’s probably following a food source. She’s going where the crab, lobster, conch and shrimp are,” he said.

Amanda will teach researchers a little more about where sea turtles travel, how deep they dive, water temperatures and how fast they swim, thanks to a cell-phone-sized tracking device attached to her reddish-brown shell.

The gadget is designed to fall off after a couple of years, Manire said.

While the location function of the device is working, the satellite programming to transmit depth and water temperature is not activated yet. It should kick in within about a month.

Amanda arrived at LMC on Dec.

28. Divers rescued her about a mile offshore from the Lake Worth Inlet. The turtle suffered from trauma to both of her front flippers, Manire said.

LMC is a nonprofit organization that rehabilitates and researches sea turtles. About 50 injured sea turtles are released into the Atlantic Ocean annually, as well as about 2,000 hatchlings.

The organization also counts sea turtle nests on the 10-mile stretch of beach from Juno Beach to the Martin County line.

Back in 2001, Upper Keys florist and avid animal rescuer Sharon Mahoney Ellenwood asked her fishing guide husband Billy, “Why aren’t there any women’s fishing tournaments in the Keys …