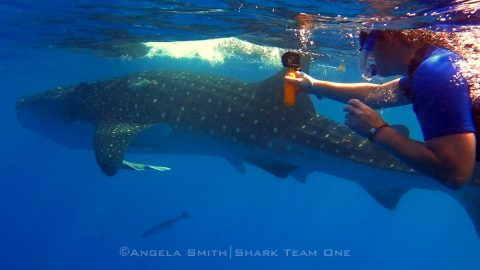 When Angela Smith and eight Guy Harvey Outpost Whale Shark Expedition members plunged into the Caribbean Sea off Mexico earlier this month, they thought they might not be able to keep up with the school of the huge, gentle animals they had travelled so far to observe.

But Smith–leader of Shark Team One— and her fellow explorers were pleasantly surprised to find the massive brown fish with white dots swimming in slow circles as they gulped plankton on the surface, making it easier to track and identify them.

“The sharks were looping around us instead of moving by fast.  The waters were teeming with food for the sharks,” Smith, the expedition leader, said.  “We saw a number of juvenile sharks 12 to 15 feet long and got some really good interactions.  The time we had in the water was super amazing.”

From May through September, as many as 500 of the endangered animals– some as large as 25 feet–show up in the warm waters off the northern Yucatan Peninsula to suck down tiny fish, fish eggs, crustaceans, and microalgae.  It’s the largest aggregation of whale sharks known to science, and researchers from all over the world are eager to get a better handle on their numbers, migration, life history, and reproduction.

Shark Team One bolsters that effort with its citizen-science photo identification project– capturing images of the spots located behind an individual shark’s gill slits that provide its unique fingerprint.  The information is uploaded to an app that is shared with scientists and fisheries managers. All which is part of Shark Team One’s efforts to educate people on shark conservation.

Though rough weather from Tropical Storm Franklin shortened their in-water explorations, the team made the most of their trip to Isla Mujeres.  They explored the Ixchel Temple on the island’s southeastern tip and got a private tour of the nearby Tortugranja sea turtle conservation facility. They also traveled to the Yucatan mainland where they toured the sparsely-visited Mayan temple Ek’Balam (“Black Jaguar”) with a professional archeologist as their guide.  They took a swim in the nearby Cenote X’canche– a beautiful natural sinkhole filled with fresh emerald water.  And they snorkeled the world’s largest underwater art exhibit– the Museo Subacuatico de Arte, a collection of more than 500 life-sized sculptures that serve as an artificial reef to ease human pressure on nearby coral reefs.

For more information on traveling to Isla Mujeres visit www.GuyHarveyOutpost.com or call the Outpost Travel Desk at 800-513-5257.