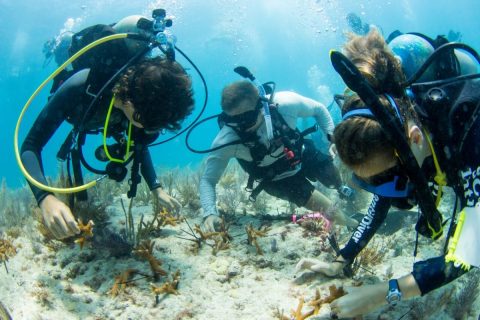 Retired U.S. Army Staff Sergeant Justin Lansford was struggling to stay 20 feet deep as he tried to help his teenaged dive buddy Diana plant staghorn coral fragments on the ocean floor.  It was only Lansford’s second scuba dive; he wasn’t wearing enough lead weight; and he inadvertently kicked a frond of soft coral behind him.

So Lansford shucked his artificial leg and resumed zip-tying pieces of coral to three-inch long masonry nails driven into the hard substrate as Diana did her best to hold him down. Diver Michael McCauley, a prosthetist and researcher, recovered the leg, carried it around with him for the rest of the dive and returned it to Lansford on the dive boat.

“I usually dive without my leg so I just tore it off,” Lansford said, shrugging.
“Next time, I’ll go down with five pounds more weight.”

Lansford–who lost most of his leg to a bomb that blew up beneath his truck in Afghanistan in 2012–along with Diana, McCauley and about 30 others mounted a record-breaking mission June 27 planting 500 corals in only one hour at Hero’s Reef about a mile east of Looe Key in the Lower Florida Keys.  The corals were raised in a nursery by scientists from Mote Marine Laboratory on Summerland Key who directed volunteers from the Combat Wounded Veteran Challenge and SCUBAnauts International where and how to plant them.   Since the researchers, vets, and ‘Nauts kids began working together in 2012, they’ve planted more than 1,600 corals on the 50-yard-by-20-yard reef five miles offshore.

“It gives you a feeling you did something to help preserve this planet,” said retired U.S. Army diver Billy Costello, who lost his right lower leg to a land mine in Afghanistan in 2011.  “It’s very powerful to a lot of vets.  They’ve lived a life of service to a cause and we’re naturally driven to it.  You have the opportunity to defend things in your own country and take care of it.”

The Mote scientists were delighted with the skills and enthusiasm of the volunteer task force.

“I’d like to see the vets and SCUBAnauts coming out more than once a year.  We need your help to make this happen,” Crosby said.

Mote’s goal is to plant one million corals on the Florida reef tract over the next five years, which Dr. David Vaughan– executive director of the Summerland Key lab–said could be enough to remove staghorn and elkhorn from the endangered species list.

Marine research wasn’t the only science going on during the Hero’s Reef mission:  McCauley and Dr. Duffy Felmlee, a professor at Connecticut’s University of Hartford prosthetics program, joined the dozen or so combat-wounded vets underwater to observe how they use balance and other strategies to perform tasks.

The researchers attached sensors to the vets’ lower legs, mid-thighs, and lower trunks to track their movements and look for ways “to make a better prosthetic leg for scuba diving,” McCauley said.

As for the young ‘Nauts, 17-year-old Chelsea Donald said planting corals alongside the vets over the past four years has been an “amazing experience.”

“It’s cool to see everything they can do and everything they’ve done for our country,” Chelsea said.  “It’s doing something so crucial for our oceans and the world as a whole.”

She plans to return for the next coral-planting mission — especially to see how much Hero’s Reef has grown. 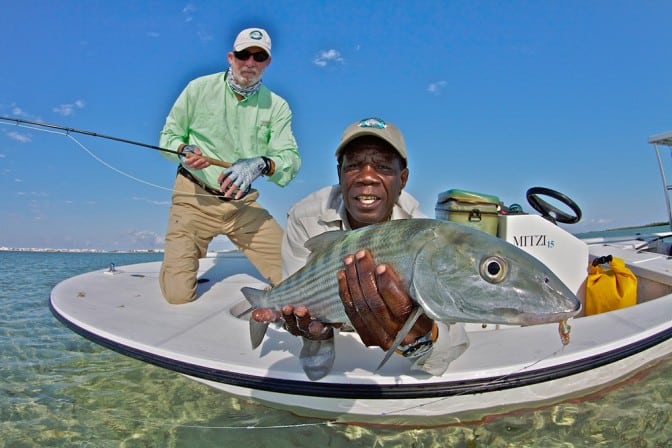