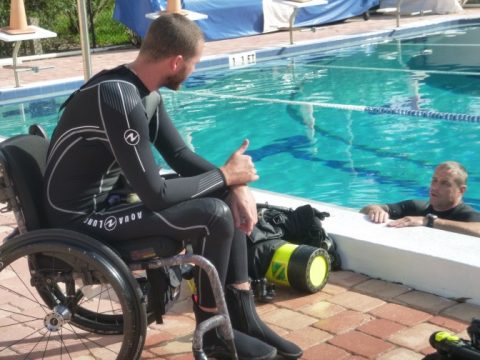 Retired U.S. Navy Petty Officer Seth Wade likely will have to get around using a wheelchair for the rest of his life– a daunting prospect at the age of 26. After losing use of his legs in a 2014 auto accident that damaged his spinal cord while on deployment in Europe, Wade is adjusting to civilian life in his hometown of Tampa. But instead of being depressed about what he can’t do as a paraplegic, Wade has decided to focus on what he CAN do– snow and water skiing, sailing, and, just recently, scuba diving.

“Being in the water gives you a sense of freedom,” Wade said between pool training sessions in Clearwater recently. “I love it. I can’t wait to get to the good stuff.”

Wade was trained by Scott Crawford, a U.S. Air Force retiree and owner/instructor at Rock Bottom Divers near Tarpon Springs. Crawford has been donating his time to teach and certify military vets– both disabled and able-bodied– as scuba divers for the past three years. He works with several non-profit veterans’ groups to help defray costs for the dive boat, equipment and instructional materials.

“It’s called ‘adaptive diving’,” Crawford said of how he trains his students. “It’s based on what the candidate can do — not what he can’t do.”

Crawford was introduced to Wade by Nelson Corbin, executive director of the North Carolina-based Wounded Veteran Retreat Program. Corbin, a U.S. Army Rangers veteran, began organizing outdoor outings for wounded vets about three years ago after his son, who served in Special Forces, lost both legs in Afghanistan.

Corbin helped out with Wade’s dive training sessions in the pool and an inland spring. But neither he nor Crawford cut the young man any slack. Wade lowered himself from his wheelchair to pool side and in and out of the water. He had to perform the same skills as any other open-water dive candidate– removing and clearing the mask underwater; executing out-of-air drills and emergency ascents; donning his buoyancy control device and many others– all while swimming with webbed gloves and no fins. He took to the skills easily– probably because he grew up fishing and snorkeling in Tampa Bay. 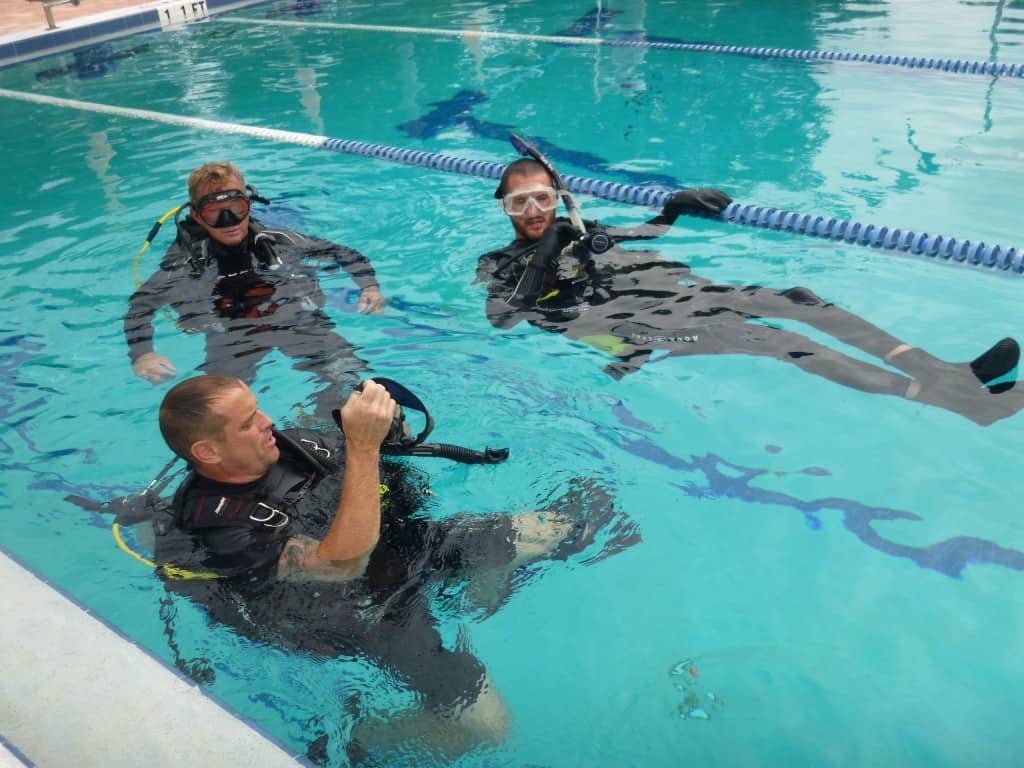 The student earned both an open-water and Nitrox scuba certification through the SSI agency. Nitrox is a breathing gas containing less nitrogen than regular compressed air– important for Wade because it means less nitrogen accumulating in the scar tissue on his spine. Too much nitrogen in the blood and tissues can lead to decompression sickness, or the ‘bends’ — a painful and serious medical condition.

“It’s nice having two vets [in training sessions],” Wade said. “Doing it with non-vets from a local dive shop would be not as comfortable.”

The new scuba diver reflected back on the dark days of his post-accident recovery at Walter Reed National Military Medical Center near Washington, D.C. where he was treated by several psychologists, some of whom he “fired”. But one who he called ‘Lieutenant Dan’ stood out as particularly helpful.

“Somehow, he was hooked up with Guy Harvey,” Wade recalled.

‘Lieutenant Dan’ got Wade a limited-edition print of a tarpon signed by Harvey, along with a tee shirt. Today, that tarpon hangs over Wade’s bed at home in Tampa.

“I never did get to thank Guy Harvey,” Wade mused. “If you see him, tell him I said thanks.” 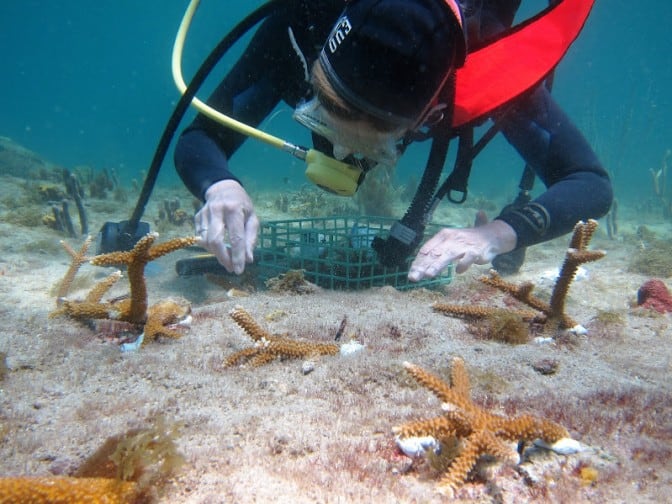