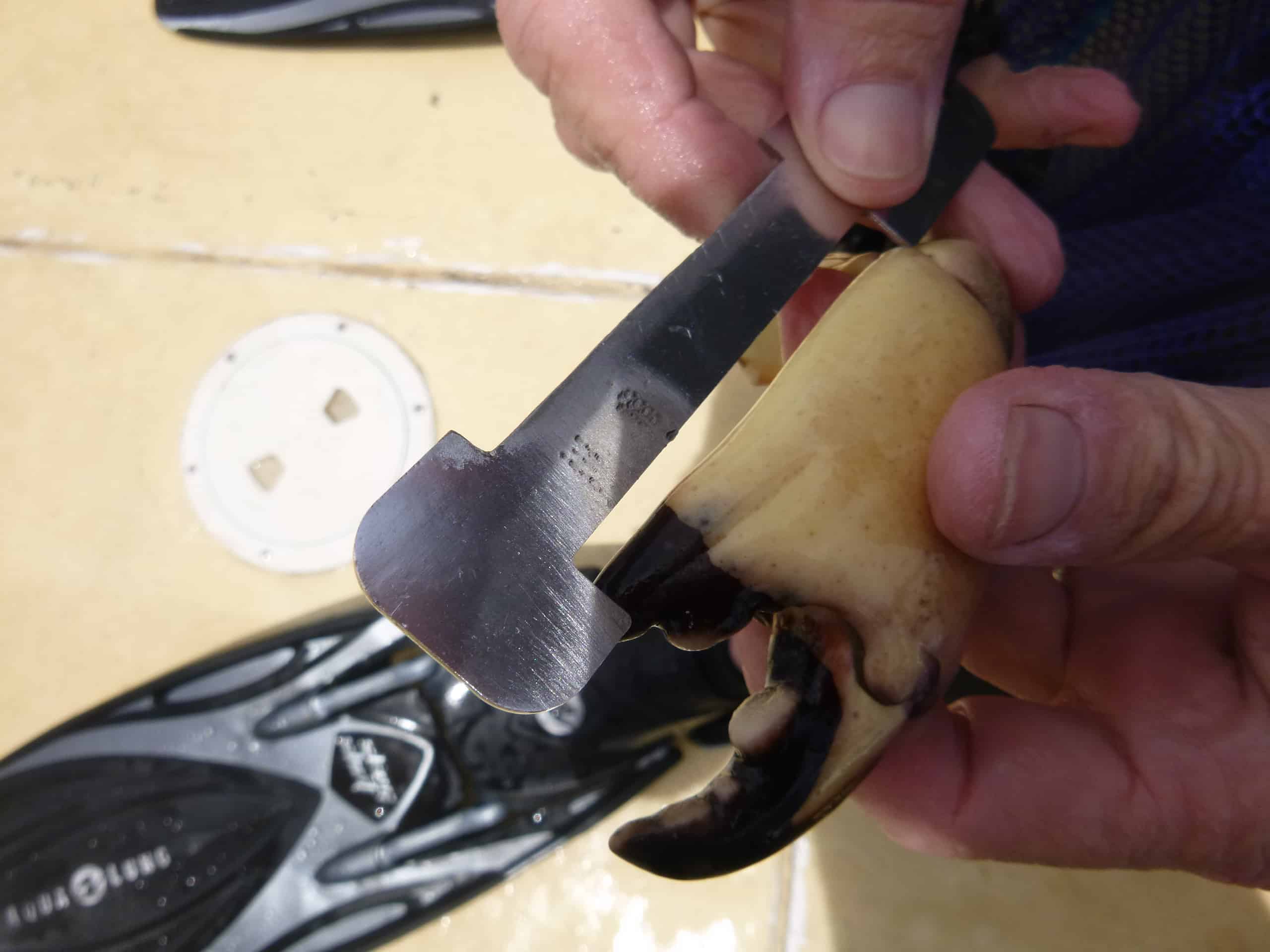 It’s open season for stone crabs–Florida’s signature seafood delicacy– through May 15, 2016.  But with a  price tag that often exceeds a barrel of crude on the world oil market, this sought-after crustacean is out of reach for many who long for a sample.  For those of you with gourmet tastes but a fast-food wallet, the best solution may just be to catch dinner yourself.

True, nabbing a stone crab by hand can be hazardous to your digits, but go Zen– channeling the spirits of your ocean-pioneering, hunter-gatherer ancestors.

Believe it or not, there are scores –maybe even hundreds–of people walking around Florida right now who have never paid $90 for a pound of colossals, yet enjoy them nearly every week until season’s end. Most are tight-lipped about their stone crab-catching prowess because they don’t want competition from newbies in their harvest grounds.  But a few have agreed to share their knowledge of this shadowy, but well-established hunting tradition.

First, you’ve got to find your targets.  This is both harder and easier than you would think.  Harder, because stone crabs are secretive and stealthy, spending most of their time holed up where they are not easy to spot–unlike lobsters whose protruding antennae usually give them away.  Easier, because their habitat is relatively shallow so you probably won’t need scuba tanks to harvest them.  You can find them from flats only a few feet deep out to 30 feet deep in open water.

Stone crabs love caves of all kinds, especially in areas with strong currents.  They sit there patiently with their claws folded in front of them, waiting for smaller prey to drift by so they can seize it with 19,000-pounds-per-square inches of pincer-pressure.

Their caves may be carved into the ledges of sand-and-rock flats –often with a telltale trash pile of shells left outside the entrance. Or they could be found on the rims of potholes in sea grass meadows, or next to docks, bridge pilings, and in undercut seawalls.

Now that you’ve found them, you’ve got to gather your courage and commit to grabbing them.

Some hunters go straight in, reaching over the crab and clamping their thumbs over both claws.  He or she who hesitates gets pinched.

Others tempt the crab out of its lair by extending it a bait, such as a whole bally hoo, then grabbing the quarry after it seizes the offering. But that technique sometimes doesn’t work because the crab will sever the bait with its claw before you can get a hand on it.  So it’s back to step one– the courageous method.

You are allowed to take both claws as long as they measure 2 3/4 inches or more.
But the animal will be handicapped in its ability to feed during the year or so it takes to regenerate the appendage.  Conservation-minded hunters take only one, careful not to kill the crab while doing it.  The bag limit is one gallon of claws per person or two gallons per boat, whichever is less.

If all this seems too daunting, you could shell out a few bucks for a recreational limit of five traps that you bait with fish scraps or whatever’s handy and check them every few days.

Or you could just stick to the La-Z-Boy and enter the Guy Harvey Outpost Seafood Month Sweepstakes for a chance to win a cooler full of seafood–including stone crabs– catered by Mangrove Mike’s and delivered to your door.  Go HERE to enter.

Sue Cocking chronicles the Guy Harvey Outpost travel and adventure experience in regular blog posts on GuyHarveyOutpostNews.com/.  For 21 years, Cocking covered the full spectrum of outdoors adventure opportunities in South Florida and beyond for the Miami Herald, including fishing, boating, diving, hunting, paddling, camping, sailing and powerboat racing.  She is a certified scuba diver and holder of an IGFA women’s world fly fishing record for a 29-pound permit.