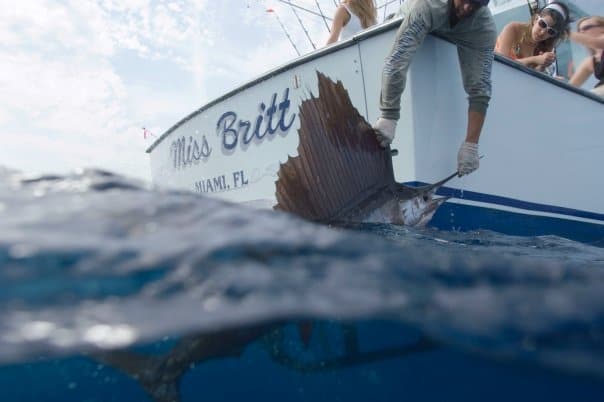 Miami-based charter fishing captain extraordinaire Ray Rosher —  a Guy Harvey Outpost Outfitter–didn’t reach the top of the industry by following the leads of others.  Rosher– whose teams have won top honors in just about every billfish tournament circuit from South Florida to the Bahamas, to the Caribbean and beyond–is an innovator who’s not afraid to try something unorthodox to reign atop the fleet.

With sailfish season hitting its stride along the Florida east coast and Keys, captains and anglers might want to consider changing things up from their usual practices.

For example, Rosher says, many fishermen believe that the only consistent method of catching and releasing sailfish between Miami and Jupiter is to drift waters with a drastic color change– usually 80 to 200 feet deep– using live bait on kites– typically goggle eyes (big-eye scad); threadfin herring; or sardines.

But Rosher said winning tournaments in the Pacific waters of Cabo San Lucas, Mexico taught him a thing or two about the effectiveness of dead-baiting.

Trolling a dead bally hoo on a spinning outfit behind a Mylar dredge, Rosher has enjoyed days of multiple hook-ups amid a fleet of live-baiters off Miami.

“That stuff about ‘they won’t eat dead bait when there’s live bait around’ is baloney,” he said.  “Don’t get pigeonholed thinking you have to catch sailfish in Miami on a live bait.”

Referring to his dredge/dead bait set-up, Rosher said, “I don’t care what [sailfish] think it is when they’re five feet away.  It’s too late; he’s got a bait swimming by him and he eats it.”

The captain points out that live baiting for sailfish generally works well between Jupiter and Miami because of steeper, narrower bottom contours that funnel the fish through predictable corridors as they feed into the northbound Gulf Stream current.  In the Stuart-Fort Pierce area, he said, trolling dead baits is preferable because the gradually-sloping bottom necessitates covering lots of ground to locate fish.

In the Keys where waters tend to be clearer and calmer and currents less consistent, fishermen look for showers of bally hoo being harassed by sailfish near shallow reefs such as Conch Reef and American Shoal.

“Fish that might be out in 100 feet of water come into the reef to feed,” Rosher said.

The 2015-16 sailfish season has been a roller coaster ride so far, ranging from days where it’s difficult to get a bite to double-digit releases.  The onset of cold fronts to the north usually propels pods of sailfish south.

And if this year is anything like past sailfish seasons, Rosher predicts a consistent push of fish into South Florida and the Keys well into May.

It looks like a brilliant fireworks display, except it’s underwater.  In the middle of the night several days after the August 29 full moon, boulder corals all along the Florida Keys reef tract …