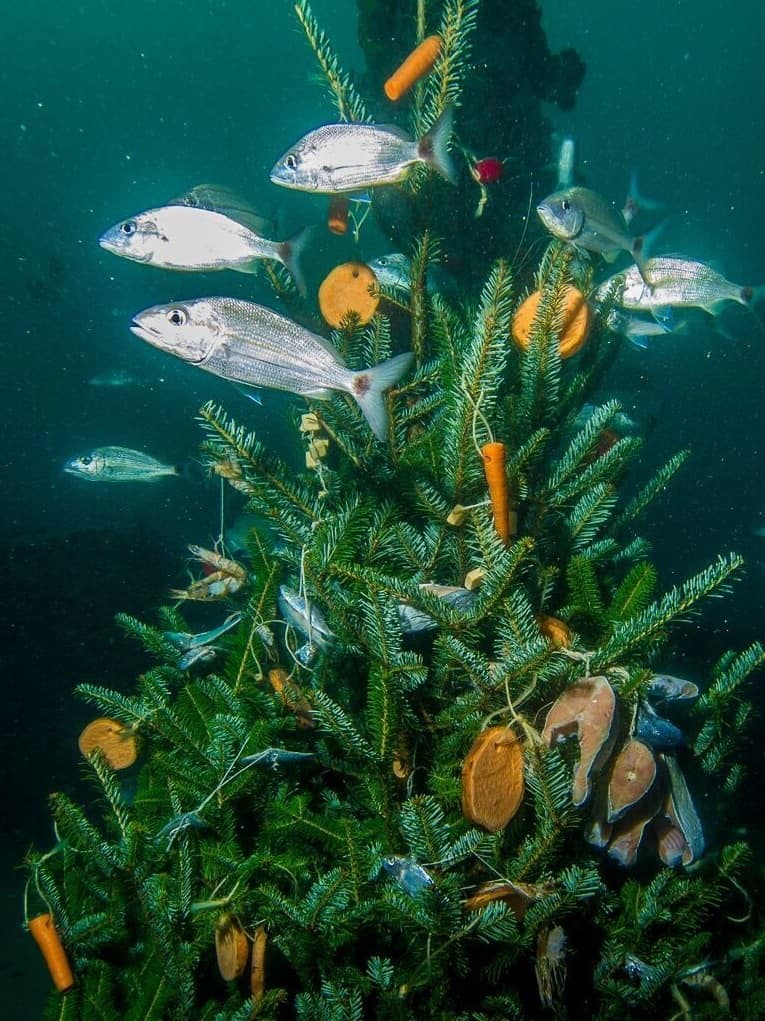 Back in the mid 1980s–nobody really remembers exactly when–members of the South Florida Dive Club were gathered around the Christmas Tree at their annual Yuletide party when someone wondered aloud what to do with the tree afterward.

“We were imbibing,” admits past president Joe Smariga of Fort Lauderdale.

But the question persisted after everyone had sobered up and “a bunch of us got together the next Saturday and sank it,” Smariga said.

The inaugural sinking didn’t go too well; the dive boat they used had to pull the tree down to the bottom.  But thus began an annual holiday tradition that was repeated again last Saturday when the club deployed a live spruce to the deck of the Merci Jesus– a shipwreck that sits 70 feet deep off Fort Lauderdale.

“We look forward to it.  Fish love it,” Smariga said.

Smariga and club member Eric Rohde had placed the tree in a 120-pound concrete base rigged with two lift bags to control its descent.  First off the boat, they took  about five minutes to get the tree to the bottom.  Then the rest of the group followed carrying bags of edible decorations– frozen pilchards; radishes; carrots; sliced sweet potatoes; and a head of lettuce to crown the tree.

Club members shot stills and video of their friends who were decorating; a few curious fish hovered in the background watching the process. When all the garnishes were in place, the divers moved back to watch how the local residents would receive their gifts.

It didn’t take long.  A gang of grunts quickly swarmed the tree, snapping at a shiny garland of pilchards and fighting each other for the fishy tinsel.  A couple of small grouper drifted in, scaring off some of the smaller grunts and making off with the bait fish bits.  They were joined by a couple of small hogfish and mangrove snapper.

When the pilchards were gone, tussles erupted over the vegetable ornaments with fish chasing each other around in a rugby-like scrum.

In the midst of the commotion, a three-foot spotted moray eel appeared on deck flexing its jaws and looking confused.  It slithered between a diver’s feet and circled the base of the tree.  It made a circular ascent through the branches almost to the top, then descended and swam away without eating anything.

Divers looked at each other and shrugged.

As the divers’ air supply dwindled, they made a slow ascent back to the dive boat, leaving the tree at the disposal of the fish.

The needles would be gone in a few weeks, and after a year or so, only the concrete base would remain– sitting next to the remnant of a long-gone tree of a Christmas past.

Sue Cocking chronicles the Guy Harvey Outpost travel and adventure experience in regular blog posts on GuyHarveyOutpostNews.com.  For 21 years, Cocking covered the full spectrum of outdoors adventure opportunities in South Florida and beyond for the Miami Herald, including fishing, diving, hunting, paddling camping, sailing and powerboat racing.  She is a certified scuba diver and holder of an IGFA women’s world fly fishing record for a 29-pound permit.