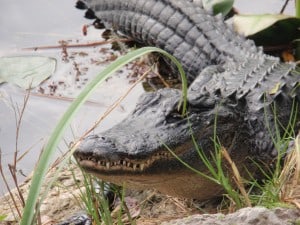 It’s a multi-sport event like no other. You paddle instead of swim; hike instead of run; and bike the final leg with alligators as spectators. Hah! The Iron Man’s got nothing on the Everglades & Big Cypress Tamiami Trail Triathlon.

Conceived by a couple of Everglades National Park rangers about three years ago as a way to encourage athletes, families, and nature lovers to “experience the diverse habitats and recreational opportunities offered along the Tamiami Trail/US 41”, this free, year-round event is as strenuous or as leisurely as you want it to be. It’s not a real competition. You don’t have to complete all three legs in the same day. There’ s no one keeping track of the time you took to finish. But by the time you are done, you will have learned a thing or two about this beautiful, fragile ecosystem– the largest wilderness east of the Mississippi.

Recently, I completed the triathlon in just under eight hours. It was fun, not too difficult and gave me an excuse to carbo-load enthusiastically before embarking. You, too, should try it soon before the weather grows too warm and buggy.

My first stop was Everglades National Park’s Gulf Coast Visitor Center in Everglades City– starting point of the 3 1/2-mile round-trip kayak/canoe leg to Sandfly Island. (The visitor center is NOT located on Tamiami Trail, but it isn’t far.) I checked in with the rangers, then set out across Chokoloskee Bay in a single sit-inside kayak. With an outgoing tide and northeast winds of 10-15 miles per hour, the trip took only about a half-hour. I wandered around the island for a few moments, examined the artesian well and cistern built by the early 20th-century inhabitants, and treaded the modern boardwalk.

When you do this leg, pay attention to the interpretive signs posted on the island because when you return to the visitor center, rangers will ask you a question about what you saw and you have to answer correctly in order to win the grand prize of a finisher bumper sticker. The same thing happens at the other two sites.

My return trip to the visitor center took more than twice the time of the outbound leg because I had to dig down against wind and tide and steer around shallow oyster bars. The cheeping of ospreys and whine of small planes taking off from Everglades Air Park made up my paddling soundscape. 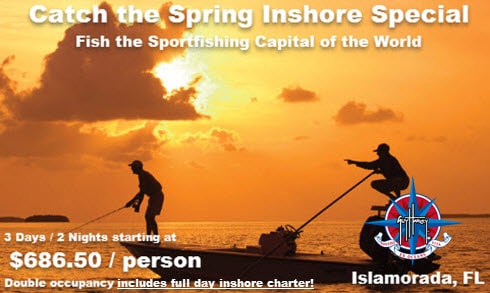 I got a ranger to stamp my trail map after correctly answering the non-64-million-dollar question, then hopped into my car and drove about 20 miles to the Big Cypress National Preserve Oasis Visitor Center on Tamiami Trail.
A ranger there gave me a trail map and lent me a walking stick for the three-mile loop trail hike north, and I was off.
I had previously walked this section of the Florida Trail, but never when it was this wet. Normally in mid-winter, you might encounter mud and a few shallow puddles, but nothing like the knee-deep sloughs that I slogged through. I even scattered tadpoles as I sloshed along. (If you do this, make sure you bring dry shoes and clothes.)

When I arrived at a beautiful pine and oak hammock, I was supposed to cross over to the east to reach a swamp buggy trail for the return hike to Oasis. But that trail is very rocky, so I just turned around and splashed back the way I came– admiring distant cypress domes and exchanging greetings with an egret.

I correctly answered question number two, returned the ranger’s walking stick and drove east on Tamiami Trail for 20 miles or so to the Shark Valley entrance of Everglades National Park to complete leg #3–the extremely popular 15-mile bicycle loop road.

Shark Valley is the best place by far in South Florida to encounter alligators of all sizes. They sun themselves beside the canal and sometimes even sprawl across the road, forcing you to pedal around them. (There’s a reason why you find so many here, but I am not going to give away the answer to triathlon question number three.)

I set out on my bike from the visitor center and spotted a gator lolling on the side of the road in the first five minutes. It was the first of many I passed on my two-hour ride– all of which ignored me. I also encountered anhingas drying their wings and great blue herons looking for fish to impale. Normally in mid-winter, the sawgrass prairie on the “back” side of the road is nearly dry, but water was streaming across the pavement and the culverts held whirlpools.

I made it back to the visitor center about an hour before dark and collected my congratulatory bumper sticker. This had been one very long, very exhilarating and strenuous celebration of nature– but totally worth the effort. And a great excuse to carbo-load.

Go HERE for more information on the Tamiami Trail Triathlon.

*******************
Sue Cocking chronicles the Guy Harvey Outpost travel and adventure experience in regular blog posts on GuyHarveyOutpostNews.com/. For 21 years, Cocking covered the full spectrum of outdoors adventure opportunities in South Florida and beyond for the Miami Herald, including fishing, diving, hunting, paddling camping, sailing and powerboat racing. She is a certified scuba diver and holder of an IGFA women’s world fly fishing record for a 29-pound permit.
**********
Share your photos, videos and experiences with Guy Harvey Outpost by hash tagging #OutpostAttitude to all of your social media posts.