Five green sea turtles that came ashore to nest on Broward County, Fl. beaches in the past couple months have reported safe to scientists with the Nova Southeastern University/ Broward County Sea Turtle Conservation Program in the wake of Hurricane Irma.

Dr. Derek Burkholder– a research scientist at NSU’s Guy Harvey Research Institute who heads the program–and colleague Glenn Goodwin, a Nova PhD student, glued satellite tags to the animals’ shells after they completed depositing their eggs and were returning to the ocean.  The tags beam the turtles’ locations every time they surface, which is downloaded to the scientists’ computers.  The study subjects have kept in touch ever since– even in the thick of Irma’s onslaught.

“Everybody sought out deeper water or at least moved away from where things were rough,” Goodwin wrote in an email.  “Afterward, everyone returned to their normal areas, except Therese who wandered around, then ended up near Key West.”

The tags usually transmit for about a year– time enough for the scientists to try to solve several mysteries that are key to conserving the threatened and endangered reptiles:  where do green and loggerhead turtles come from to nest in South Florida; how frequently do they come here; and where do they go between nesting events. Genetic  samples taken during tagging will show whether sea turtle populations along the U.S. east coast are linked.

“We don’t know what this population does when it leaves here,” Burkholder said.  “This project is to learn where they end up:  who’s going where and who’s playing with  who.”

That information is vital to sea turtle conservation, Burkholder said, because it informs management decisions at the state, regional and federal levels, such as whether the animals are nesting and travelling through areas with high fishing and boating pressure that might warrant additional regulations. 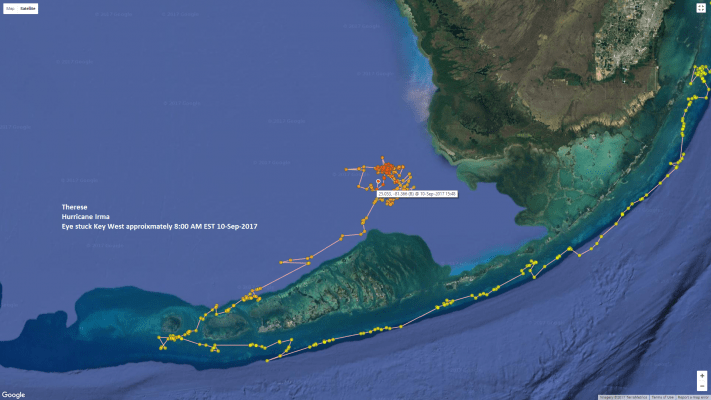 In addition to the five with satellite tags, seven others were implanted with internal chips and wear external tags so that divers and anglers who encounter them can report their locations.

While the animals handled Irma just fine, their nests on Broward beaches did not; over half were swept away by winds and waves.  Fortunately, it happened late in the nesting season rather than the mid-summer peak.

Broward County’s Sea Turtle Conservation program has been in operation for 28 years — focused primarily on monitoring and protecting nests from various threats and gauging hatching success. So far this season, surveyors have counted 3,337 nests–2,692 loggerheads; 634 greens and 11 leatherbacks on 24 miles of beach (excluding Mizell-Johnson State Park).  It was a record year for greens; the previous mark was 500 in 2012.  Nova Southeastern University and the Broward County Sea Turtle Conservation Program are part of a network dedicated to sea turtle conservation that includes several volunteer organizations –Sea Turtle Oversight Protection (STOP), the South Florida Audubon Society, and Sea Turtle Awareness Rescue Stranding (STARS). The volunteers work tirelessly throughout the season to help protect sea turtle hatchlings by redirecting them away from disorienting coastal lighting back to the moon- and star-lit ocean.

The three-year tagging study is funded by a $45,000 grant from the Community Foundation of Broward County.  But the program could use some help, since each tag costs upwards of $4,500.  The first turtle to be tagged was named George Finley (even though it’s a female) after the winner of Guy Harvey Outpost’s May sweepstakes.

If you would like to sponsor a tag for next season, contact Burkholder at dburkholder@nova.edu or call 954-262-3673.

By Sue Cocking, Guy Harvey Outpost staff writer  scocking@guyharveyoutpost.com A beautiful fish with a very ugly face.  Slippery and slimy but tasty to eat. A feisty sport fish but a nuisance exotic. …