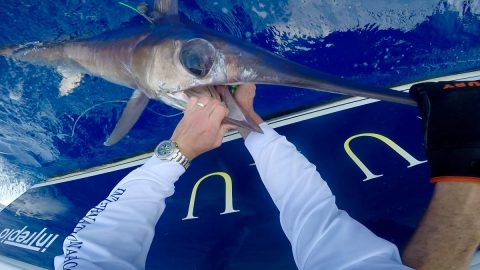 About 12 years ago, Cayman Islands businessman Clarence Flowers– an avid sport angler– chartered Miami Beach captain Bouncer Smith for a South Florida swordfishing excursion.  Smith shared his tactics and techniques with his customer and they caught a fish.  Flowers told the captain about the nascent recreational swordfishery in his Caribbean home waters:  a 600-pounder had actually beached itself in Grand Cayman Island’s North Sound and recreational anglers were taking some hefty ones on hook-and-line.  That fateful conversation led to the inaugural Cayman Swordfish Challenge in 2005.

The contest also serves as an on-water laboratory for scientists seeking to learn as much as possible about this unsung, but robust recreational fishery.

“Better than ours– especially the night fishing,” Smith, a 50-year-veteran charter captain, said of Cayman Islands swordfishing.  “The daytime I would say is on a par with here–maybe slightly better.”

Fisheries scientist Travis Moore of Pompano Beach-based Gray FishTag Research was on the water for the two-day contest and implanted a 54-incher with a satellite tag before releasing it.  The tag, anchored in the dorsal fin, will detach after a year and beam minute-to-minute data about the fish’s movements to a satellite which downloads the data to Moore’s computer. It is the ninth satellite tag to be implanted in Cayman Island swords by Moore and colleagues since 2011.

“What we’re doing is to help develop this fishery for the Cayman Islands,” Moore said.  “The Cayman government may decide to use this data to regulate foreign fleets coming into their waters.” 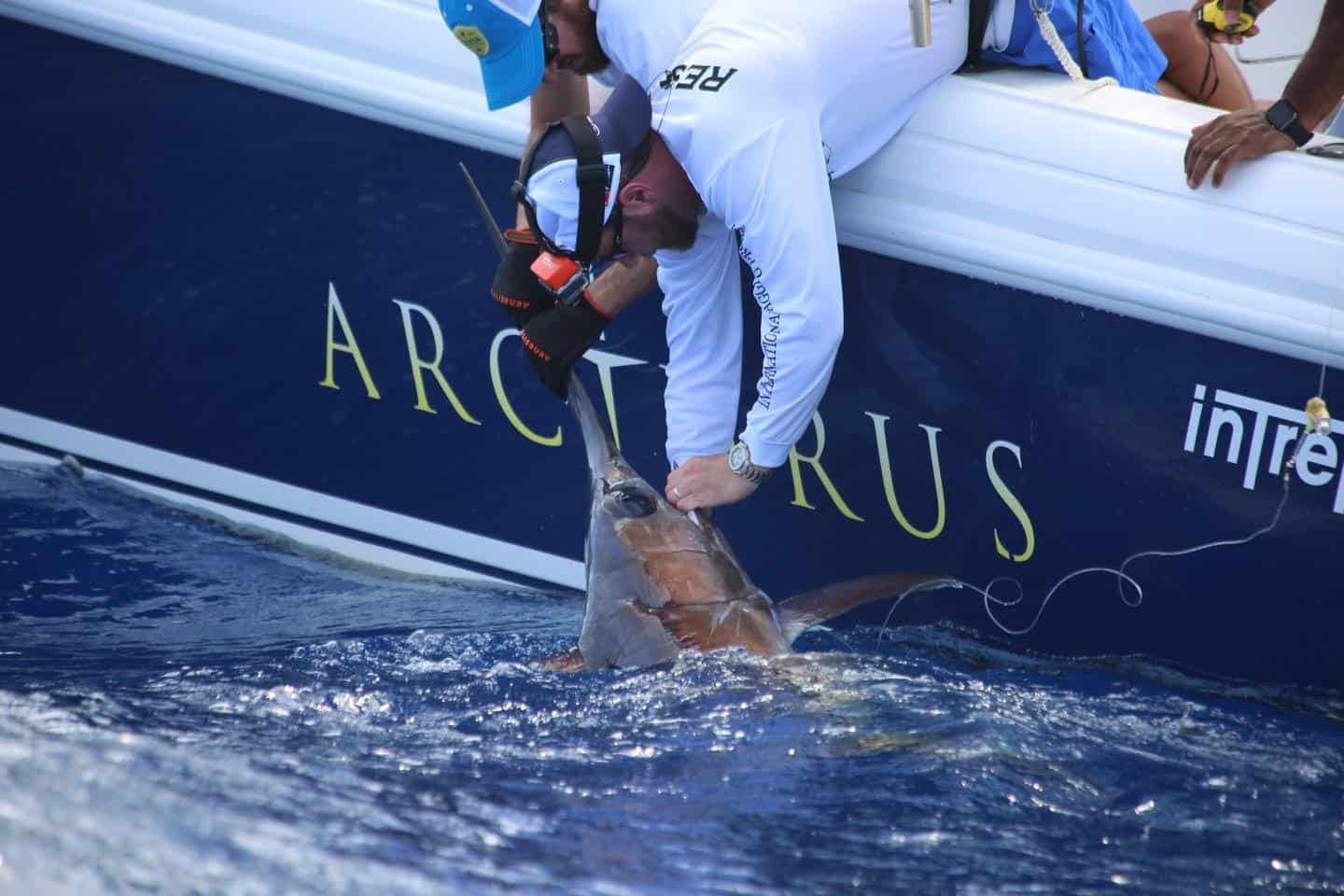 Right now, both Moore and Smith say, there ‘s really no directed commercial fishery for swords in the Cayman Islands; the effort is primarily recreational with a few fish kept to eat or sold to local restaurants.  But as word of the bounty gets out, the powerful and tasty billfish potentially could face heavy exploitation and would require careful management.  The islands’ record is a 392-pounder caught in 2012.

Moore says preliminary satellite tracking data shows the Cayman Islands serve as a “rest stop” for the tasty pelagics that hang out here roughly from November through May, then head north as waters warm.

“They’re feeding in a perpendicular pattern to the Cayman Trench before going north,” he said.

Recreational anglers target them in ways similar to their South Florida counterparts:  deep-dropping squid, small tunas, bonitos or belly strips in 1,600 to 1,800 feet of water in daytime and either drifting or slow-trolling baits with planers 100 to 300 feet deep at night.  Smith says all three of the Cayman Islands– Grand Cayman, Cayman Brac, and Little Cayman–are basically sea mounts surrounded by very deep waters where upwellings concentrate bait, and therefore swords could be found just about anywhere.

“You can fish so close to the islands that you can read the license plates on the cars,” he said.

Moore relishes the opportunity to enjoy the sport and collect important information at the same time.

“The fishing there is really off the charts,” he said.  “Amazing.”