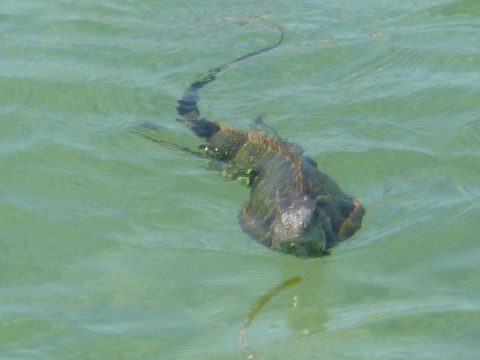 For some reason, I just couldn’t get my balance on the stand-up paddleboard.  It wasn’t my first time paddling this type of watercraft; I just hadn’t done it for several years.  Every time I tried to rise from a kneeling position, I felt shaky and couldn’t manage to just stand up straight and paddle.

None of the other four guests in guide Kelly Sutter’s tour group had any problems.  The mom and dad and their two teenaged daughters, all from Denver, popped right to their feet upon leaving the dock at Paddle! the Florida Keys on Tavernier Creek– even though it was the family’s very first time on SUPs.

I just shook my head and kept up with them, albeit kneeling in the center of the board.

Winds were calm enough that Sutter suggested we paddle out of the sheltered creek and head about a half-mile out to a mangrove island in the ocean.  Still kneeling while the others stood and paddled effortlessly, I looked down to see a small spotted eagle ray and alerted the rest of the group.  The creature obligingly glided by slowly enough that everyone could admire it.

By the time we reached the island, my knees were bothering me.  I tried to stand up on the board again– and failed.  Sutter suggested switching boards with me, saying hers might be less tippy than mine.

It did feel a little more stable as I clambered aboard.  But I was still off-balance.

“Look out at the horizon, not down,” Sutter said.

So I did and saw a small lemon shark cruising the flats about 50 feet away.  Without really thinking about it, I stood up to get a better look at the shark and miraculously stayed upright.

And that was all there was to it.  I stood up and paddled without falling off for the next 2 hours.

Good thing, too, because there was plenty to see just on that ocean side flat:  another spotted eagle ray; a nurse shark; a couple bonnethead sharks; and an iguana swimming straight toward me heading for the island.  It was kind of startling; even though I’ve seen literally hundreds of these escaped reptiles sunning themselves in the Keys, I’ve never encountered one doing the dog paddle in the open ocean.

We headed back in the direction of shore, but Sutter said we could extend the tour a bit and check out a narrow creek just west of the Tavernier bridge.  We passed numerous schools of mullet, got buzzed by pelicans, and encountered a mother and baby manatee that rose to take breaths of air on the surface.

We paddled into the narrow waterway that Sutter directed and immediately felt the force of the tide against our boards.  We soldiered on, but pretty soon it became so constricted that we had to paddle single-file.  I spied two baby tarpon lurking in the shadows of the mangroves.

When we found we could barely squeak through the tunnel, we headed back out to the main creek and back toward the dock.  The dad and one of the teens fell off their boards but I think they did it on purpose to take a swim.  Both quickly got back on–laughing– and continued paddling.

It was quite the wildlife stand-up show.

Paddle! the Florida Keys, 90773 Old Hwy., Tavernier (near Islamorada), offers paddleboard and kayak sales, rentals and tours.  For more information, visit www.paddlethefloridakeys.com or call 305-434-5930. Need a hotel? Stay at the Islander Resort, a Guy Harvey Outpost in Islamorada which also has paddleboard rentals on property. www.guyharveyoutpost.com.