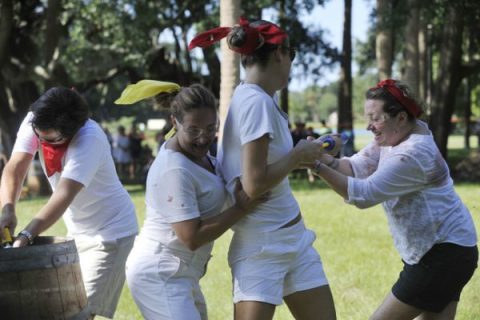 Between beaching, fishing, touring and chilling in America’s oldest city, you’ve got to eat. And few destinations offer the rich variety, quality, creativity and all-around deliciousness of St Augustine.

With a year-round population of just over 14,000, this small, historic city on Florida’s northeast coast boasts hundreds of restaurants. The mediocre ones that don’t attract repeat customers tend to fail quickly. The rest –mostly small and owner-operated– are a delight to visit and taste.

“This is an exciting town for food,” said Chef David Bearl, associate professor at the University of Florida, guest chef at the White House and St. Augustine resident. “A wonderful place for dining out. The [restaurants] I like are the ones you know they care; the people that work there love what they’re doing. The chefs love food and really care what’s on the plate.”

Whatever your taste, you can find it here: Spanish; Minorcan; Cuban; Greek; Italian; Mexican; Japanese; New American; Old Southern; and the list goes on– most of them located only a few blocks apart. It’s no wonder the American Culinary Federation– the nation’s foremost professional chefs’ organization– is headquartered here. But if you were to hone in on the signature flavors of St. Augustine, they would probably come down to Spanish, Minorcan, and fresh, local seafood.

The Spanish, who colonized St. Augustine some 450 years ago, continue their influence on its culinary scene to this day with delicious tapas (small plates) and excellent wines. The city just concluded its annual Spanish Wine Festival which featured the only Batalla de Vino (wine fight) held in the U.S.

Based on a similar event celebrated annually in Spain’s Rioja region, the St. Augustine version sports teams of five dashing around a field shooting each other with squirt guns filled with red wine. The object is for each team to protect its “queen” from rival shooters, and whichever monarch emerges with the cleanest clothing after the 15-minute battle gets $500 donated to the charity of his/her choice. This year’s winner benefitted K-9s United– an organization that helps local law enforcement agencies obtain police dogs.

Minorca’s influence on St. Augustine cookery comes mainly in the form of the datil pepper–a spicy plant brought by settlers from this Spanish Mediterranean island during the 19th century. Hotter than a jalapeno and grown locally only in St. Johns County, the datil has made its way into everything from salad dressing to conch chowder to a chocolate-covered version served by the Hot Shot Bakery. At the bakery’s recent chocolate datil-chowing contest, the winner consumed 52 in five minutes– and lived.

Fresh, local seafood– shrimp, blue crabs, grouper, tilefish, mahi and others–served with fresh, local produce rounds out the best of St. Augustine’s foodie culture, according to Chef Bearl. The city’s head-swiveling array of seafood restaurants each offers its own creative renditions– most of them imaginative and mouth-watering.

At Black Fly the Restaurant, owned and operated by Vaughn Cochran and partners, I eagerly devoured my entree of lump crab meat in a gentle cream sauce with basil and red pepper over pasta. Then at the Floridian, whose style I would describe as Southern Fusion Meets Outer Space, the “Southern Supper Tuna” was completely unexpected and different from any seafood I’ve ever eaten. Note the ingredients: cornmeal-dusted, seared Atlantic tuna with tomato concasse -simmered summer vegetables over a rich, sweet summer corn puree finished with fancy slaw and parsley gremolata. I don’t know what most of that means, but it was amazing and piled with fresh local ingredients from both land and sea. St. Augustine in a skillet.

If you are planning a visit to the Ancient City, stay at the Holiday Isle Oceanfront on St. Augustine Beach– currently being renovated to become a Guy Harvey Outpost Resort. Go HERE for updates on the renovation. If you happen to be there Oct. 3-9, get your foodie on at St. Augustine Restaurant Week featuring fine local cuisine at affordable prices. For more information go to StAugustineRestaurants.com. And for updates on St. Augustine’s constantly-evolving food scene, visit Allie O’s blog at SimplyAugustine.com.