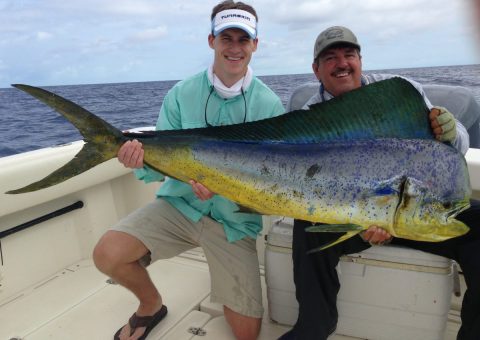 Few sights bring more joy to an offshore angler than a huge aqua-blue/lime green dolphin fish, or mahi mahi, leaping out of the water with the hook firmly lodged in its jaw.

Not only is the angler in for the fight of his or her life, but there’s the happy prospect of becoming tonight’s barbecue hero.  I once fed 16 residents of my condo from a third of the fillets from a 40-pound bull.

Over the next few weeks, you could earn top hunter/gatherer accolades by fishing for big mahi in Islamorada’s offshore waters.  It’s not a given, but according to fisheries biologist Don Hammond, who launched the private Cooperative Science Services Dolphinfish Research Program in 2006, medium-to-large-sized fish (six pounds and up) historically start showing up in the Keys in April.

“It could be early April this year,” Hammond said.

Indeed, a 60-pounder was reported caught near Islamorada a few weeks ago on a live bait suspended from a kite.

Hammond, who runs the world’s largest dolphin tagging project, says typically this time of year the Keys see a push of very big fish (gaffers), followed by an even bigger push of mediums (heavy lifters).  As numbers of 40-to-60 pounders start petering out, they are replaced by large groups of ‘schoolies’, or very small dolphin.  By June, catch rates of five or more fish of all sizes drop off, he said.

The primary source of Keys dolphin, the scientist says, is the Gulf of Mexico where the fish become entrained in the Loop Current, get spun around the Dry Tortugas and into the Florida Straits. Dolphin can travel more than 20 miles in a day.

Keys anglers might encounter them anywhere from the main reef tract to more than 30 miles offshore, depending on Gulf Stream currents and wind direction and speed.

For most recreational anglers, catching the big bulls is what Islamorada inshore/offshore guide Captain Randy Towe calls a “hunting accident”.

But Towe and others who want to target the gaffers employ a more sophisticated strategy that mainly involves observing the habits of offshore seabirds.

The best telltale of a large dolphin (and maybe even a blue marlin!), Towe says, is a man o’ war bird (also called a frigate bird) continuously circling an area.  Use a good set of binoculars to spot the bird from far away.

“Watch that bird and read which direction he’s going so you can get in front of that dolphin,” Towe advised.  “A tuna tower is an advantage. If you don’t have one, put out baits and troll and get lined up with the bird.”

Make sure you have a 20-to-30-pound class spinning outfit with 60-pound leader ready with a dead flying fish hooked in the head that you can cast to the big fish, he said.

But not all the bulls are found underneath man o’ war birds.  Hovering terns can also be your best fishing friends.

“The more [terns] you see, the more bait is getting pushed up to the surface which means a school of small fish,” Towe said, adding that smaller flocks of two or three terns usually indicate the big ones.

If bird watching is unsuccessful, then Towe recommends the old standbys of targeting weed lines and floating debris.

“My M.O. is to go to an area where big fish have been seen or caught and start trolling two lines with naked bally hoo,” he said.  “When I hook one, I get the spinning rods out and start hooking more fish.  I might have eight to ten dolphin [on rods] in the rod holders waiting for the big fish to show up.”

Anglers who are just going for numbers of legal-sized fish for the table can be more haphazard in their approach.  But, says Towe, “there is a way to target the big ones and this is how you do it.”