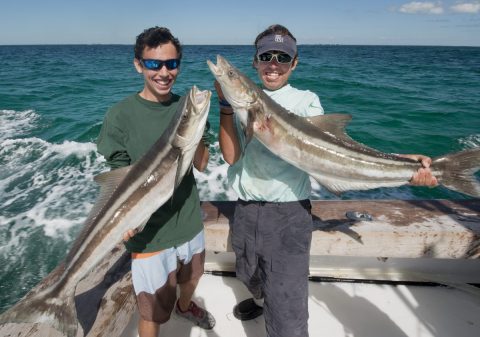 The article co-authored by Ryan Jiorle, Robert Ahrens and Micheal Allen is believed to be the first scientific examination of an opt-in, recreational fisheries data base where private anglers–not government researchers– log catches, releases and other information from their fishing trips using smartphones and tablets.  The iAngler apps use software developed by the non-profit Snook & Gamefish Foundation’s Angler Action program.

The UF researchers wanted to find out how information reported on the iAngler apps would stack up against data collected in creel surveys by NOAA Fisheries’ Marine Recreational Information Program (MRIP).  MRIP survey takers go to public boat ramps and marinas and record what anglers bring home while iAngler users can log more information–catches, releases, length, weight, GPS location, and photos–from the water and private docks.

The scientists found that iAngler catch rates for common snook, spotted sea trout, and red drum were similar to those gathered by MRIP when compared in areas of similar size.  MRIP researchers covered most of Florida while iAngler users were concentrated in the urban southeast and western areas of the state.

“When you have an apples-to-apples comparison, the data lined up very well,” Jiorle, now a fisheries management specialist with the Virginia Marine Resources Commission, said in a telephone interview.

While Jiorle and his colleagues wrote that they don’t see iAngler replacing existing survey methods, “it may have the potential to fill data gaps, especially with regard to discarded fish and small, spatially diffuse fisheries.”

The Florida Fish and Wildlife Conservation Commission has already employed iAngler information about snook discards in stock assessments.  Florida is believed to be the only state in the U.S. to rely on that kind of angler-generated data.

“This type of data collection system provides good information if people know that it’s there and use it,” said Brett Fitzgerald, Snook & Gamefish Foundation executive director.  “The path moving forward is to have an army of anglers logging on.”

Besides iAngler and iGHOFish (a free download on iPhone or Google Play), the Angler Action program’s portfolio includes the iAngler Tournament app, the CCA STAR Tournament, and the Joe Bay Fishing and Visitors Survey covering a recently-reopened fishery in Florida Bay in Everglades National Park.

For Fitzgerald, the UF study shows the importance of anglers taking responsibility for reporting data to help their favorite sport.

“This is a huge step toward saying we can be accountable for ourselves in ways we didn’t expect we could be,” he said.  “Whether it’s Angler Action or somebody else, it’s going to effect change in the process and it’s got to be better because it involves more people.  More information is better.”