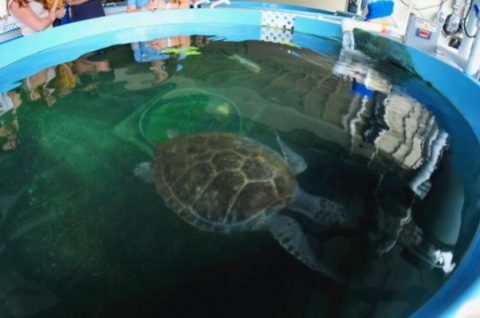 Mean Joe Green didn’t act very tough; he swam languidly in a circular 1,100-gallon tank waiting for his lunch of lettuce, squid and broccoli from the hospital commissary just a few feet away. He needed to bulk up a bit before he could be sent home, which might take a few months.

Named after an NFL great, Mean Joe is a green sea turtle.  He arrived at the Sea Turtle Hospital at Whitney Laboratory in St. Augustine in February 2016, stunned by cold and afflicted with internal and external tumors caused by a virus that’s been showing up more frequently in Northeast Florida sea turtles called fibropapilloma.

The hospital, which opened its doors in October 2015, is the only facility in the region specializing in treating animals with the disease and trying to find a cure for it.  Typically, veterinarians use carbon dioxide lasers to remove the tumors, and administer pain medication and antibiotics to enhance the healing process.  Recovery can take several months, and then the turtle is released back into the waters near where it was found.

There’s no shortage of patients at the hospital.  The facility admitted its first one the day after it opened and has been constantly busy ever since.  It’s important work since all seven sea turtle species in the world have been classified either threatened or endangered.  Of those seven, four—loggerhead, green, leatherback, and Kemps Ridley–nest on North Florida beaches.  Most females return to nest on the beach where they were born, often laying clutches of more than 100 eggs.  But only about one in 1,000 sea turtles survive to adulthood– about 15-20 years.

The Whitney Lab, affiliated with the University of Florida and located between the Atlantic Ocean and Matanzas River, opened in 1974 to study biosciences- applying knowledge of marine animals to investigate issues of human health, natural resources, and the environment.  It conducts monthly public lectures and opens its doors to students from kindergarten through 12th grade.

If you would like to schedule a tour of the sea turtle hospital, email turtletours@whitney.ufl.edu.