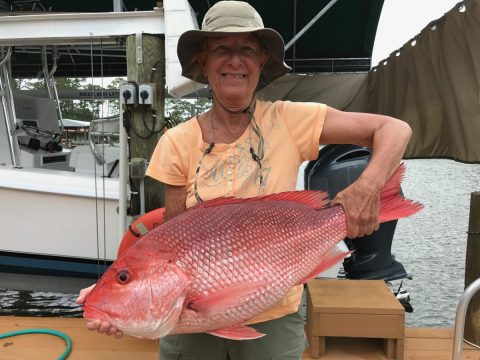 [Destin, FL.–]    Lowering my live threadfin herring bait more than 115 feet to the bottom of the Gulf of Mexico, I was really hoping to hook a red snapper instead of an amberjack.  For one thing, red snapper is a primo dinner entree while, to me, AJs aren’t all that.  Plus, AJs were out of season, so we couldn’t keep one even if we wanted to.  Meanwhile, the recreational red snapper season for private anglers was so short in federal waters (more than nine miles offshore) that we only had three days to catch our limit of two per person per day.

With four anglers on Mark Houghtaling’s 28-foot Contender open-fisherman, we were allowed eight of the cherry-hued tasty reef dwellers that day.  So far, we had one okay-sized red in the cooler; they have to be at least 16 inches to keep.

As my bait hit bottom near some unknown structure that Houghtaling had marked on his fish-finder, I almost immediately felt small twitches telegraphed up the 65-pound braided line.  The herring, dangling from a circle hook, was probably being chased –hopefully by a snapper.

I didn’t have to wait long.  Something yanked so hard on my line that it nearly pulled me overboard.  As my arms strained to keep hold of the rod, which was sticking out way too far over the gunwales, Houghtaling rushed over and grabbed me by the waist to keep me in the boat.

I wrestled the butt of the rod into the holder of my fighting belt and tried to pump the monster in, but still the heavy braid was ripping off the reel and I couldn’t do anything but hang on.

Finally, the Thing stopped swimming and I was able–slowly–to reel it up from the depths. When it popped to the surface about five minutes later, it revealed itself:  a 16-pound red snapper.  Yipppeee!

While that fish was our largest, we also boated a 14-pounder and several more in the eight-to-ten pound class– all but one caught on the same mysterious honey hole about 18 miles off Destin Pass.  The wreck or reef or whatever it was held so many snapper that they would chase their hooked brethren to the surface, and we never caught any other species on that spot.  By 11 a.m., Houghtaling, his wife Nancy, their friend Ron and I had scored a limit.

Since we had the rest of the day to fish, Houghtaling — a renowned light-tackle offshore guide in the Miami area for 30 years who retired to the Panhandle five years ago–decided to go prospecting on some of the other waypoints saved on his GPS.  With such a short federal season, he figured it would be beneficial to check some spots in state waters (less than nine miles from shore) for later.

A couple drops yielded only AJs and triggerfish, but one in particular produced a legal-sized red– all of which were released alive.  Good to know, since the recreational red snapper season in Florida state waters is open daily through July 9, then continues on Fridays, Saturdays and Sundays in September and October, and on Labor Day.  In neighboring Alabama, the state recreational season — also less than nine miles from shore– runs through July 31.

Federally-permitted charter and headboats, however, may fish for red snapper in federal waters throughout the Gulf through July 19.

If you would like to book a red snapper charter in Florida Panhandle waters, the Destin area has one of the largest charter fleets in the state.  Visit https://www.harborwalkfishingcharters.com.  For a complete rundown on red snapper regulations, go to myfwc.com and click on “Saltwater Fishing”, then “Recreational Regulations”, then “Snappers.”

NEWS UPDATE:  The Florida Fish and Wildlife Conservation Commission will hold a special meeting June 9 to discuss the possibility of adding private recreational fishing days for red snapper in federal waters this summer. But the agency would likely have to agree to give up some fishing days in state waters in order for federal fisheries managers to agree to it.  To participate in the meeting, go to MyFWC.com/About and click on “The Commission” and “Commission Meetings”.

If you would like to book a snapper charter in Alabama Gulf waters, a good bet is https://www.gulfshores.com/fishing/charters.  For more on Alabama red snapper rules, visit www.outdooralabama.com.