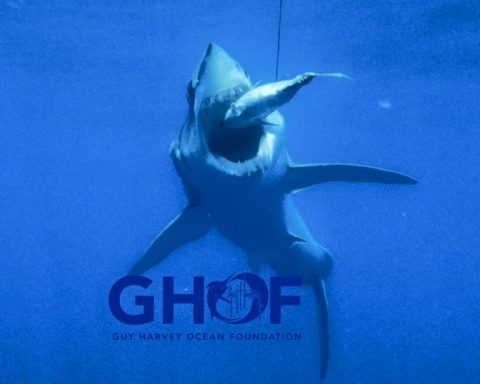 Just about everywhere Dr. Guy Harvey looked, a mako shark was darting around tearing at a bait tossed overboard from Captain Anthony Mendillo’s boat.  Harvey and cinematographer George Schellenger were standing in an aluminum underwater cage off Isla Mujeres, Mexico shooting video footage only inches away from the gnashing teeth of the frenzied predators.  You would think they might be a little frightened. But no.

“It was cool!” Harvey said later. “A fantastic opportunity to film mako sharks.  Without the cage, you’ll get bitten.  It’s an absolute necessity.”

The marine scientist/artist/conservationist didn’t stop at filming.  He got back on board the boat, put out heavy-duty fishing rods baited with bonito chunks, and over several days, caught eight of the sharks and tagged them with satellite trackers. Thanks to a special davit Mendillo built, the sharks were kept in the water while they were being tagged to minimize stress on the animals.  All swam away smartly after being released.  You can follow their progress at the Guy Harvey Research Institute shark tracking web site. And you can make reservations to take your own mako shark cage dive HERE.

Sharks worldwide are in trouble from overfishing, but Harvey says the mako is especially vulnerable for several reasons:  its meat is tasty; it is found in offshore waters where commercial fishers target swordfish; and it travels long distances to feed and mate through the waters of countries that don’t protect it.  As one of the ocean’s top predators, the mako serves a vital ecological purpose, taking out the weak and sick of other species and keeping the marine environment in balance. Knowing when and where it travels helps fisheries managers devise strategies to conserve the species. Sadly, Harvey said, 15 of the more than 50 makos he and his colleagues have tagged over the past three years have been killed by commercial fishers.

To raise awareness of the plight of the mako and other sharks, Harvey is at SeaWorld Orlando this week painting a mural adjacent to the soon-to-be-opened Mako roller coaster.  Park goers waiting in line will be able to watch the underwater video shot by Harvey and Schellenger off Mexico — narrated by Harvey himself.

Under a new partnership with Harvey, SeaWorld has agreed to sponsor the tagging of five more makos.  The tags, which transmit data for up to three years, cost about $4,000 apiece.  Harvey says having SeaWorld on board will broaden the audience for his message of mako conservation and share the costs.

By Sue Cocking | Guy Harvey Outpost It looked more like the marine version of a rodeo than a scientific expedition in the clear, shallow waters of Tiger Beach off West End, Grand Bahama Island in the spring …