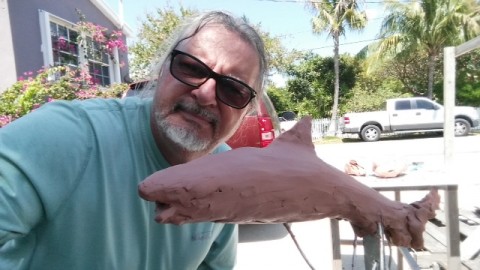 Islamorada marine artist Pasta Pantaleo has embarked on the largest metal sculpture of his career:  a 30-foot mako shark to be constructed of reclaimed steel and assorted flotsam and jetsam that will be set on fire during the Blazing Mako Tournament and Festival Father’s Day weekend June 17-19 at the Islander, a Guy Harvey Outpost Resort.

And you are invited to watch the work in progress.

Having completed the clay model, Pantaleo now begins to weld the steel framework of the fierce pelagic predator in the courtyard of his gallery at milemarker 81.5, U.S. 1.  Once the framework is finished, the artist plans to add some flourishes, such as scrap stainless steel objects that will become eyeballs and fins.

“It’s like laying a track of music down,” Pantaleo, an amateur drummer, said.  “You have the guitar, maybe a drum solo.  A lot of little things can happen that I don’t even know about during the creative process.  If I find reclaimed anything, it’s going into it– could be car parts.”

He expects to finish his work by the end of May.  Then the hollow sculpture will be stuffed with flammables and set ablaze on the beach at the Islander in the signature finale of the Father’s Day weekend fishing tournament, art show, and “Conch-servation” Village.

Pantaleo began his marine art career in the late 1990s with paintings and tee shirt designs for fishing tournaments.

He relocated from Broward County to Islamorada about a decade ago, opened his gallery, which features mostly oil and acrylic paintings of marine life, and became the founding president of the Morada Way Arts & Cultural District, which hosts monthly “Third Thursday” art walks.

His first metal sculpture of a giant tarpon entitled “Slaying the Dragon”  rises over the roundabout  at the Islander Bayside.  Pantaleo admits he was overwhelmed by the task early on.

But he persevered and the final product won wide acclaim.

The Blazing Mako theme of the upcoming tournament and festival was selected because the shark is the mascot of Nova Southeastern University.  Proceeds from the event will benefit scholarships for students at NSU’s Halmos College of Natural Sciences and Oceanography through the Guy Harvey Research Institute.

Deck the Boats with Lots of Lights in St. Augustine

A Santa village, palm trees, dolphins, an octopus, snowmen, a Christmas tree and lots and lots of lights decorated watercraft of all types and sizes that cruised the Matanzas River in St. Augustine’s …

From late summer into early autumn, the flats of the Florida Keys are prime territory for scoring an inshore super grand slam of bonefish, tarpon, permit and snook– all caught in one day. And as …