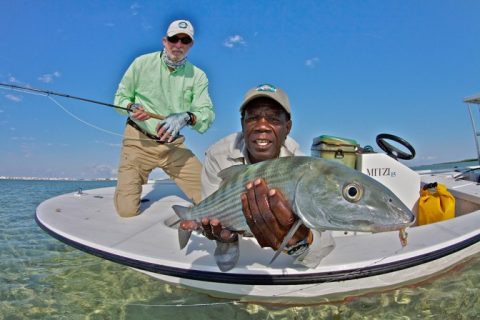 The following article appeared in the Wednesday, July 20th edition of the Miami Herald.

BIMINI, Bahamas — If Pat Ford — an accomplished fly fisher and nature photographer from South Miami — were to write an account of the bonefish he caught and released on a recent trip to Bimini, it would be pretty cut-and-dried, something like:

“Fishing with Black Fly Outfitters president Vaughn Cochran and a local guide, we saw about 20 bonefish and caught 11 on fly rod in a single day.”

Ho hum. Among accomplished anglers like Cochran, who used to be a guide in the Keys, and Ford, who has won trophies in several Keys fly-fishing tournaments, double-digit bonefish releases are fun but don’t generate much bragging.

Fortunately, things got a lot more exciting for Ford in Bimini a day later when he fished with guide Freddie Rolle and me.

Despite an impending low-pressure system, Rolle managed to find a respectable number of bonefish on the flats for me to cast. I blew quite a few casts until a group of four or five approached. Putting the fly directly in their path about 40 feet away, I was excited and gratified when one of them picked it up and performed its signature speed run across the flats.

But happiness quickly turned to dismay when my 9-weight reel fell into the water. The reel’s foot, which anchors the reel to the rod, had broken.

Ford, obviously bored by watching me not catch fish for the past 11/2 hours, sprang into action. As I held the rod bent high to try to keep tension on the fish, he attempted to hand-line the reel back into the boat. This proved tricky. Because the bonefish had emptied all the fly line, the reel held only backing, and I had the drag set very lightly. When Ford tried to pull in the backing, it slipped through his fingers as the reel sat on the bottom.

Meanwhile, the fish had no intention of being caught. It made several erratic dashes, one of which nearly tangled the backing into knots. The language erupting on the skiff during this channeling of a Three Stooges episode does not bear repeating.

Somehow, Ford managed to bring the reel back on board and wedge the broken foot onto my rod. Unbelievably, the line had remained untangled, and the fish was still connected. I held the reel onto the rod with one hand and cranked with the other.

After what seemed like decades, I fought the fish close enough to the boat for Rolle to grab it and bring it on board. We estimated it at 5 pounds. Stunned, I tried to smile as Ford obligingly snapped his trademark photos. Then he went to remove the fly before putting the fish back in the water.

That’s when we all got a new surprise: the shank of the hook had broken, and the only thing holding it together were layers of tying materials wrapped around it.

I shook my head. An incredible upending of Murphy’s Law. I wonder if there ever was a fish caught with so many factors working against it. Who needs a world record anyway?