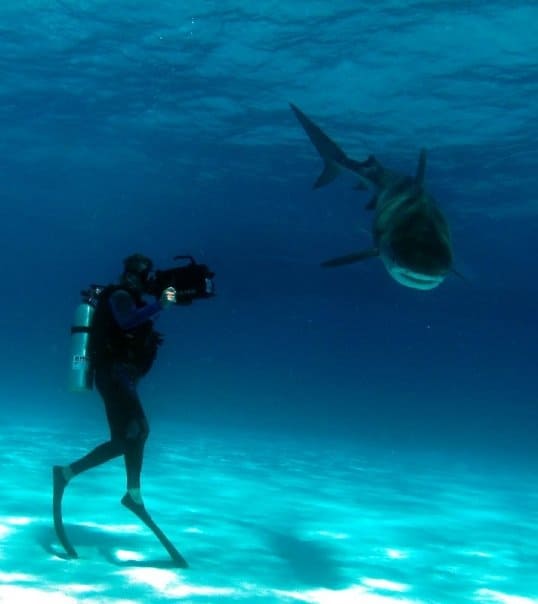 It looked more like the marine version of a rodeo than a scientific expedition in the clear, shallow waters of Tiger Beach off West End, Grand Bahama Island in the spring of 2009.  Dr. Guy Harvey– renowned marine artist, scientist, conservationist and cinematographer–and a handful of colleagues were trying to capture a 9 1/2 -foot tiger shark– one of several for which the shoal was named– so they could implant it with an acoustic transmitter tag.  The tag emits a signature beep that is picked up by an underwater receiver installed in the area. Whenever a tagged shark passes within 300-500 meters of the receiver, it stores the signal to be downloaded onto a computer.  So far, the shark had successfully eluded the scientists, but they weren’t giving up.

Not nearly as high-tech as today’s satellite tracking tags, which can follow a shark’s moment-by-moment travel for up to several years, acoustic tags are nonetheless useful, showing when and how often an animal uses a specific area.  They are also a lot cheaper than the $3,500 satellite tag.

“We should tag every one of these animals to see where they go,” Harvey said.  “The ultimate would be to have the species protected or–if not– this area of the Bahama Bank could be designated no shark fishing.  This is the beginning of what will hopefully be a 20-year study where we involve the Bahamian government, researchers from various institutions, dive operators.”

Eventually, Harvey– along with Dr. Mahmood Shivji, professor and director of Nova Southeastern University’s Guy Harvey Research Institute and their fellow researchers–managed to lasso their target underwater, bring it to the dive platform of their boat and implant the tag in its belly.  It swam away smartly.

The study– led by Nova Southeastern University scientists James Lea, Brad Wetherbee and Shivji and co-authored by Harvey– found that tigers tagged in Bermuda travelled more than 7,500 kilometers round-trip between the open waters of the mid-North Atlantic and the coral reefs of the Bahamas and Caribbean each year.  Like snowbirds, the male sharks spent winters in warm waters, headed as far north as Connecticut in summer, then returned to the same favorite winter hang-outs in the tropics.

One shark named Harry Lindo covered the longest tracked distance–27,000 miles– ever documented for a tiger.

For Harvey, Shivji and the other scientists, the findings have profound implications for tiger shark conservation.  The animals, listed as near-threatened by the International Union for the Conservation of Nature, are protected from harvest in Bahamian and Florida waters.  But as a target in the lucrative shark fin soup trade, they don’t enjoy the same safe haven in other waters where they travel.

Said Harvey:  “Understanding how these animals use the oceans is the first step toward effective conservation.  Protecting migratory species is a great challenge because they can be found in such a wide area.  Protecting  the areas where animals such as tiger sharks spend the most time is a tractable goal once those areas have been identified.”

To track the movement of the tiger sharks tagged by the Guy Harvey Research Institute, visit the GHRI shark tracking web site.

Set a New World Record for Bonefish or Permit and Win a Week’s Stay For 2 ALICE TOWN, BIMINI-NOVEMBER 21, 2011-Management at the Bimini Big Game Club, a Guy Harvey Outpost Resort and Marina has …