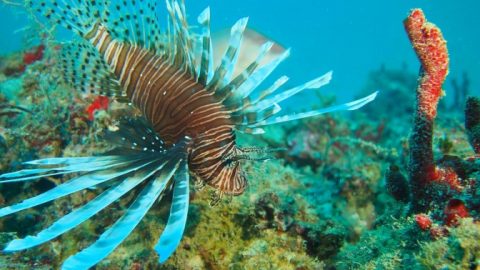 A new front in the war against invasive lionfish is expected to open soon in the South Atlantic and Gulf of Mexico: a directed trap fishery.

Faced with a quick-spreading predator from the Indo Pacific that can be knocked down but probably not eradicated, the National Oceanic and Atmospheric Administration (NOAA Fisheries) is considering a proposal by the Florida Keys Commercial Fishermen’s Association (FKCFA) to test four trap designs aimed at capturing lionfish with as little bycatch as possible. If approved, 100 traps would be placed in waters 65 to 300 feet deep off Murrells Inlet, SC.; New Smyrna Beach, FL; the Florida Keys; and Tampa for one year beginning January 1, 2017.

The pilot program requires a special federal permit because those waters have been off-limits to most fish traps for years amid concerns that they catch and kill many unintended species.

Lionfish were first spotted off the Florida coast near Dania Beach in the 1980s. They’ve since spread throughout the South Atlantic, Gulf and Caribbean– decimating populations of native reef fish as they gobble just about anything they can fit in their mouths. The pesky exotics have been documented at depths ranging from just a few inches to more than 1,000 feet in the open ocean. A single female can produce up to two million eggs per year.

Recreational and commercial divers have done an adequate job of controlling lionfish with their spear guns and pole spears on popular dive spots, but the pests have infested reefs and wrecks more than 100 feet deep. Commercial lobster trappers are making a dent, as Keys commercial fisher Gary Nichols –the single biggest harvester of lionfish–has pulled over 10,000 pounds per year from his gear.

Still, it’s not enough, environmentalists and fisheries managers say, and a directed trap fishery potentially could be an important leg up on the invasion.

FKCFA executive director captain Bill Kelly says selected commercial fishers in the four test areas will deploy two variations of the common spiny lobster trap along with black sea bass pots and a modified pinfish trap. Trappers will experiment with modified funnels and optical recognition devices that admit only lionfish. They may bait traps with live male lionfish or the gonads of females. Traps will be placed in areas with known high lionfish densities for no more than 100 days in the year.

Kelly said all fishing will be monitored by trained, certified observers and be conducted with rigorous documentation and in accordance with local laws. Some lionfish may be tagged and released to determine their movements; others will be dissected for dietary and reproductive studies. A portion will be sold to licensed fish houses. Any and all bycatch would be released.

At the end of the experiment, Kelly said, “what we’d be proving is that we’re able to identify population densities, that we can target them with a trap program, and that this gear can be strategically placed with little bycatch.”
The pilot program also will include a public outreach component –sharing catch data; educating the public about the environmental harm posed by lionfish; and encouraging people to dine on the exotics, which have a delicate flavor similar to hogfish.

Regular updates will be posted at www.TheLionfishFoundation.com and at www.FKCFA.org.
Kelly figures on a $900,000 budget, looking for funds from marine-related non-profits and private donors.

Snook:  it’s one of Florida’s most popular game fish for several really good reasons.  You can catch a really big one close to shore–sometimes literally right in your backyard–in …