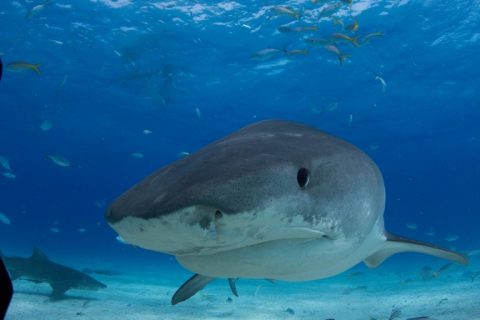 The week running up to the Fourth of July holiday of beach-going and barbecuing can mean only one thing–shark overload.

Yes, it’s Shark Week on television and at the movies– both celebration and vilification of one of the ocean’s top predators.  While this week’s Discovery Channel offerings portray a somewhat scientific view of the important role of sharks in the marine ecosystem, the latest cinematic release entitled “The Shallows” sets perceptions of the animals back to the 1970s dark days of  “Jaws”.

This fast-paced action thriller rightfully dissed as “cheesy” by a national film critic centers on a great white shark that terrorizes surfers– including the heroine portrayed by Blake Lively– on a remote stretch of Mexico’s Pacific coast. The surfers share responsibility for their peril as they insist on riding waves close to the carcass of a dead whale.  But the shark comes across as impossibly calculating, vengeful, and insatiable as it picks them off one by one.   The musical soundtrack even has a two-note riff that sounds suspiciously like the “Jaws” theme.  And without revealing the dramatic ending, I will simply say it’s even more absurd than the exploding scuba tank in “Jaws”, which was famously debunked on television’s “Myth Busters”.

I really hope viewers who don’t know much about sharks don’t take this stuff seriously.  The last thing the animals need is resumption of the “kill” tournaments that sprang up in the wake of “Jaws”.   Surely as a society, we’ve become more educated about the oceans over the past 40 years.

As marine scientist/artist/conservationist/documentarian Dr. Guy Harvey has pointed out numerous times, sharks are in more danger from us than we are from them.  While sharks killed six people worldwide last year year, we killed about 100 million of them– mostly for their fins– the main ingredient in the delicacy of shark fin soup.  This overkill turns the balance of the marine ecosystem upside down since sharks are responsible for culling the sick and weak of many species.  And as Dr. Mahmood Shivji, head of the Guy Harvey Research Institute, has pointed out– also numerous times– sharks are very useful in fighting human diseases such as cancer. Shivji is currently working with a team of scientists studying why the animals are so resilient to tumors and wounds.

Harvey spent several days leading up to “Shark Week” at Tiger Beach– a remote shoal in the Bahamas–where he and cinematographer George Schellenger shot footage for the sequel to their award-winning documentary “This is Your Ocean:  Sharks”.  Video previews just released show their interactions with Emma–the large, amiable doyenne of Tiger Beach–who Harvey calls a “living legend”.   For the past five years, Harvey and his scientific colleagues have been tagging and tracking the tiger sharks that show up there, along with oceanic whitetips and makos in other waters.  Their work has led to an outpouring of public sympathy for the plight of sharks and to the enactment of laws protecting the animals in the U.S., Bahamas, and other countries.

So in the intervals between binge-watching Shark Week, maybe we should think of creative ways to honor our apex predators:  volunteer to clean up a beach; carefully release any shark we catch incidentally while fishing for something else; or donate to a shark conservation organization.  We need sharks a heck of a lot more than they need us.

Shooting (And Saving) Swamps and Springs

[Dunnellon, FL.–]      Mac Stone is kicking across the Rainbow River against the strong current as fast as he can, and even though he is carrying a bulky underwater camera with two protruding …