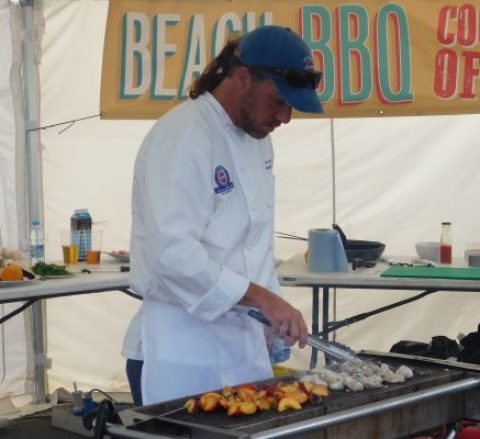 You’re standing in front of an audience of 150 mostly European foodies in a barbecue cook-off competition on an island in the middle of the English Channel when you are told that your main ingredient will be a crocodile.  Do you:  1) feign stomach cramps; 2) announce you have an international flight to catch; or 3) grill it with olive oil and fennel and serve it with onions and potatoes to hearty acclaim?

If you are Executive Chef Andy Niedenthal of the Islander, a Guy Harvey Outpost Resort in Islamorada, you pick door number three.

The man at the helm of Guy’s Beachside Bar and Grill recently returned home carrying a blue ribbon from representing the Florida Keys at the Guernsey International Food Festival — one of Europe’s largest–in Britain’s Channel Islands.

Niedenthal initially was slated to host a Southern fried barbecue brunch on Sept. 25.  But when bad weather cancelled the event, the chef found himself in the barbecue pit.  His first preparation was a dish of grilled sea scallops with Guernsey goat cheese, sherry vinegar, brown butter, leeks, and white truffle oil– a big hit with the audience.

But then the organizers announced the competition would continue with mystery ingredients. The first was crocodile from North Africa, and Niedenthal had 15 minutes to whip up something delicious in front of the live audience.

“Spur of the moment, they hand you stuff like the show “Chopped”, ‘here’s what we want you to make.  Have fun!'” Niedenthal recounted.

He came up with the olive oil and fennel recipe and won that round, then went on to win again for grilled local monkfish with plums, apricots, peaches and nectarines in a hard cider, honey, basil and white balsamic glaze with fresh basil chiffonade.

It was a camel that spoiled the chef’s wall-to-wall victory.

“Long cooking time.  Not suited to the grill.  Tough as an old tire,” Niedenthal said.

He grilled it with local tomatoes, onions and an aged balsamic glaze, but even that couldn’t save it.  Still –three out of four isn’t bad; he was awarded his ribbon and interviewed by the local television station.

Following the festival, Niedenthal continued his maiden tour of Europe, visiting Ireland, Italy and Spain, and said his travels inspired him to try a few new things at Guy’s like riffs on the tapas and small plates so popular in Spain.  Think smoked wahoo pate instead of a Spanish omelet on a crostini, for example.

And the chef may soon introduce a surprise dish on the menu:  golden crab– a very tasty deep-water crustacean caught in traps off the Keys and other parts of Florida.

He might serve it breaded and deep-fried with a sweet Thai chili sauce or steam it and serve it hot with drawn butter and fresh key lime. Either way, you know it’s going to be delicious.