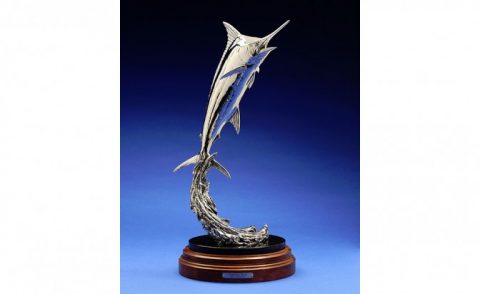 ALICE TOWN, BIMINI – Designed by Kent Ullberg, one of the world’s foremost wildlife sculptors, the Hemingway-Lerner Trophy will not only go to the overall winning team at the upcoming Billfish Invitational, but will commemorate the ideals of friendship, teamwork and the pursuit of sportfishing achievement.

Celebrated artist and conservationist Guy Harvey will host The Billfish Invitational at the historic Bimini Big Game Club located in Bimini’s Alice Town. The tournament will run from May 18-21.

The Frank Johnson Trophy, designed by noted Hawaii-born artist Ed Pang, has also been created for the Billfish Invitational to celebrate personal achievement in the advancement or recreational sportfishing/billfishing.

Host to numerous major sport fishing tournaments for more than half a century, The Billfish Invitational marks the Bimini Big Game Club’s return to world-class bluewater tournament angling, after a decade long hiatus.

The all release tournament will feature three days of fishing, and target all billfish species.  In addition to individual prizes, the tournament format will include the award of the two perpetual trophies, to be displayed in the Club’s new trophy room lounge.

Bimini’s location along the legendary Gulf Stream (a “river” of warm water) location is at the apex of a superhighway for migrating fish and acts as a kind of sushi conveyor belt carrying abundant food to the local fish. Deepwater game fish include marlin, tuna, sailfish, wahoo and swordfish, while big grouper, barracuda and schools of snapper can be found on the reefs. Bimini’s flats are home the fishermen’s favorite prey, bonefish and permit. With more than 50-record-setting catches in the waters around the island, Bimini has earned its title of Sport Fishing Capital of the World.

Administered by the Guy Harvey Ocean Foundation and the IGFA, net tournament proceeds will be reinvested in Bimini and surrounding waters. For registration and further details, contact Captain Ned Stone at nstone@guyharveyoutpost.com, or call 954-524-2225 (office) or 954-205-9595 (cell).