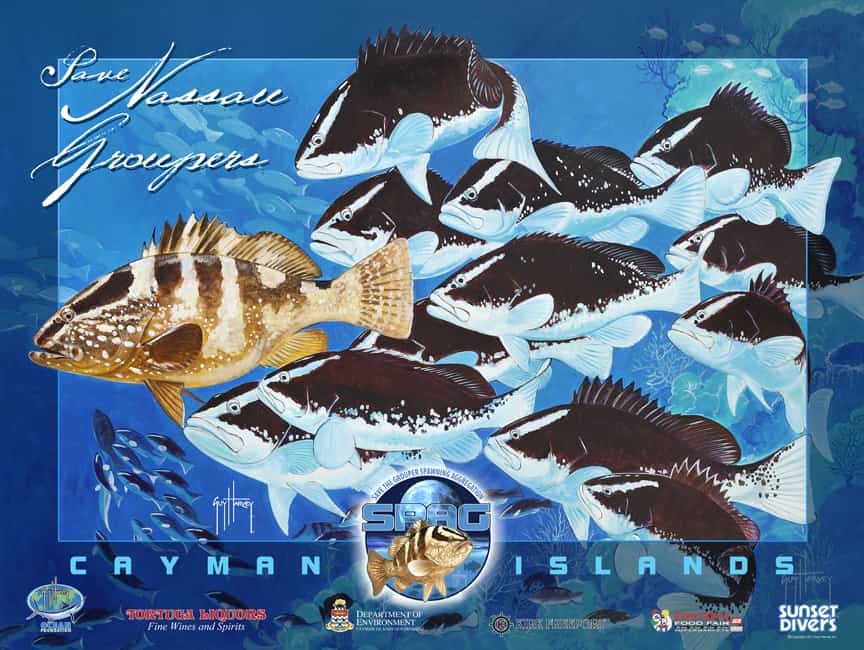 GEORGETOWN, GRAND CAYMAN— Marine artist and conservationist Dr. Guy Harvey and award-winning filmmaker George Schellenger have a strong message in their new collaboration “The Mystery of the Grouper Moon”— convince Cayman government officials to extend a ban on fishing at spawning aggregations for the endangered Nassau Grouper.

Shot entirely in the Cayman Islands and supported by REEF (Reef Environmental Education Foundation) and the Cayman Islands Department of Environment, the 45-minute documentary is scheduled to premier on September 13th at the Harquail Theatre in Grand Cayman.  Two showings are planned, with the first starting at 6 p.m. The general public is invited. Dr. Harvey, a resident of Grand Cayman, will be distributing “Save Nassau Grouper” posters to those in attendance as well as to students on subsequent school visits in October.

At stake in this effort by Dr. Harvey and other leading marine scientists is the protection of one of the last-known intact spawning areas for the Nassau Grouper in the world.  An eight year ban on fishing at these spawning aggregations, mandated in 2003 by the CI Marine Conservation Board, is due to expire in December of this year.

“The Nassau groupers in the Cayman Islands used to congregate over the full moon in January and February at eight specific sites,” said Dr. Harvey. “Local fishermen have known about these sites for years, but recently, overfishing at these sites has led to the rapid decline in this species. Today, one active site remains in west end of Little Cayman.”

Dr. Harvey said that thanks to the ban at this site and other locations, colonies are beginning to grow again, thus helping the Nassau Grouper populations to recover.

“Part of our awareness effort is to enlist the support of residents, especially school age children, to send e-mails to the Hon. Mark Scotland, The Minister of Environment, to express their wishes to see the extension on the protection of the grouper holes,” added Dr. Harvey.