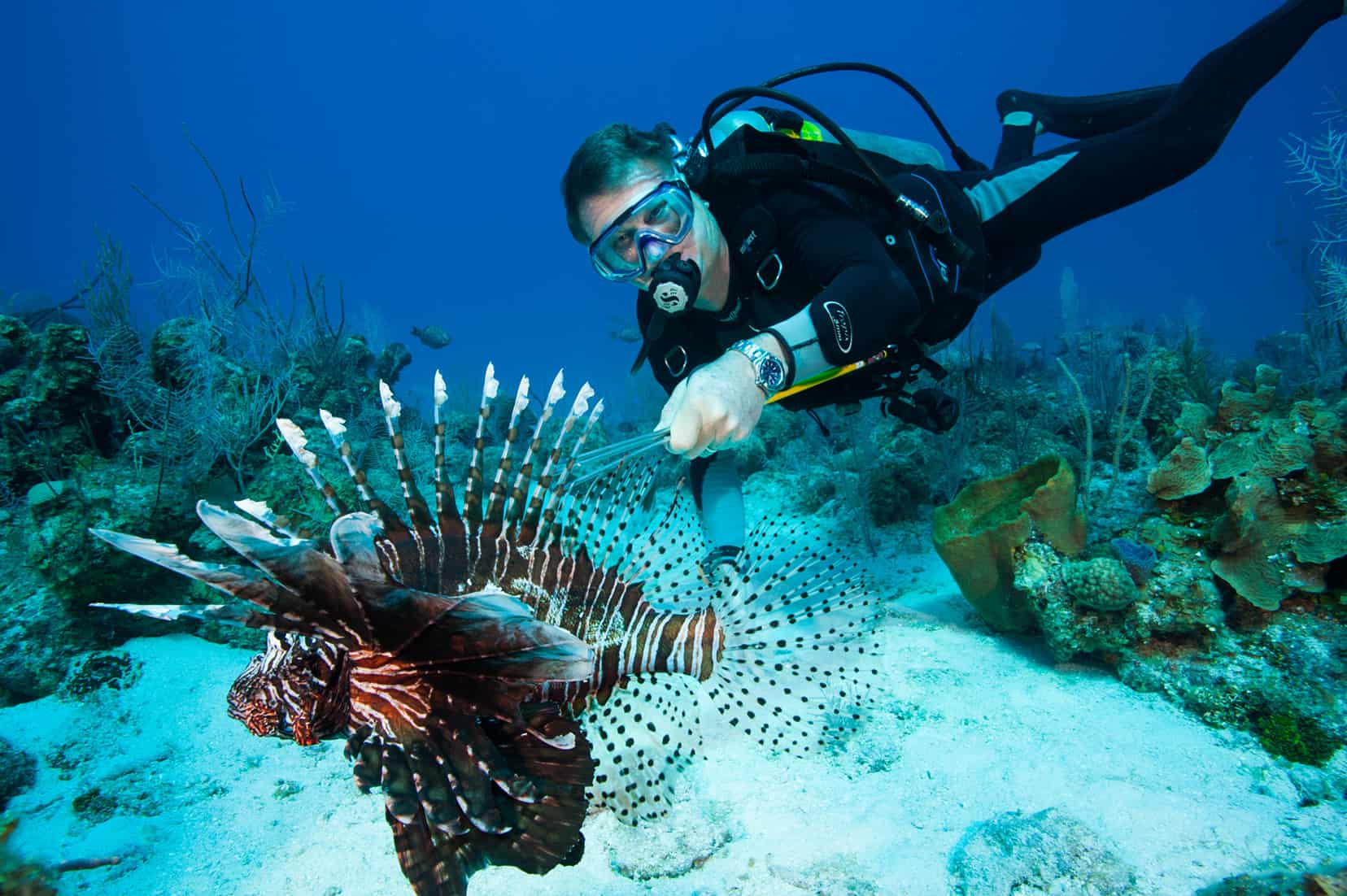 When Guy Harvey recently hosted Diego Toiran, creator of the Spanish-language television fishing show, “Pescando en los Cayos” (Fishing in the Keys) for a shoot in his Grand Cayman Island home waters, Harvey did a lot more than pontificate about the importance of eating only sustainable seafood.

The marine artist/scientist/cinematographer dived 100 feet deep, speared a dozen lionfish to about 1 1/2 pounds, cut off their venomous spines, and had them prepared for dinner that night at Guy Harvey’s Restaurant and Bar by executive chef Bruno Deluche.  Harvey and Toiran chowed down in style.

“It’s our signature dish,” Harvey said of the candy-striped exotic from the Indo Pacific.  “It tastes good and you’re helping remove an invasive species.”

The restaurant serves lionfish– blackened, ceviche, tempura, whatever– seven days a week.  While touting it on the menu may not eradicate it from the Caribbean or other waters where it is reproducing, it can help tamp down lionfish numbers.  Every lionfish consumed by a human leaves one less predator on the reef decimating native fish stocks.

The Guy Harvey Ocean Foundation has produced a guide to environmentally-friendly eating at www.guyharvey.com/seafood-guide/.  It’s similar to the Monterrey Bay Aquarium Seafood Watch guide, but it’s based on federal guidelines and research conducted by the Foundation itself.  All Guy Harvey Outpost restaurants adhere to it.

Harvey loves to eat fresh fish himself– especially lionfish, wahoo, yellowfin tuna, mahi, and wild-caught salmon — all of which are in good shape.  But his restaurants in the Cayman Islands do not serve grouper, which is over-exploited in the Caribbean and elsewhere.  And nowhere are shark or billfish to be found on the menu.  The chefs buy no seafood caught outside of legal harvest season or from waters closed to fishing.

As for the future of sustainable seafood, Harvey believes the up-and-coming fish  is tilapia– a ubiquitous, easy-to-grow freshwater species that some joke is so hardy that it can be farm- raised in a mud puddle.

“Down the road, tilapia is going to be the savior of the oceans,” he said.  “It’s very robust.  They grow quickly and taste good.  It will be the go-to fish to take the pressure off marine resources.”