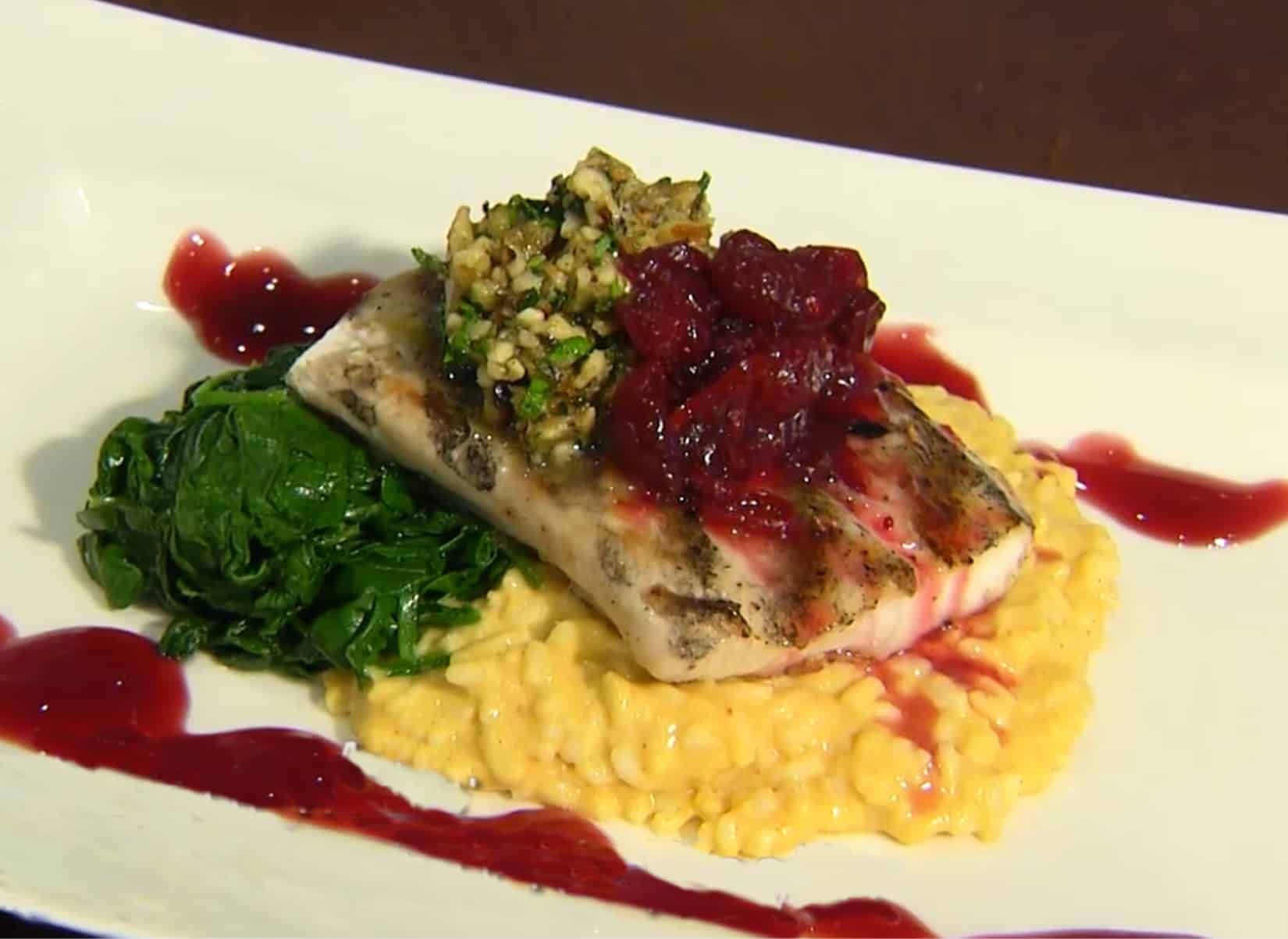 Chef Aaron Schweitzer has a direct and no-nonsense –but delicious– approach to seafood cuisine at the Guy Harvey RumFish Grill on St. Pete Beach.

“Keep it fresh, keep it simple, keep it as local as possible and don’t get too caught up in the creativity aspect,” says Schweitzer, who helped open the restaurant at Guy Harvey Outpost, a TradeWinds Beach Resort, in 2014.

Schweitzer– who grew up in Ohio, spent summers in North Carolina’s Outer Banks, and cooked in restaurants since age 15– is especially enamored of the seafood entrees available fresh from Florida such as mutton, mangrove and yellowtail snapper; swordfish; and mahi mahi. For October’s “Seafood Month” special, RumFish will serve Hogfish Escabeche, with lemon, fennel, and grape tomatoes.  Another of Schweitzer’s signature dishes, grilled mahi with walnut pesto and cranberry port wine jam (see recipe below), is the result of “playing with the flavors of fall –I just knew it would taste good together.”

Schweitzer came to St. Pete Beach via a circuitous route:  after completing culinary school in Pennsylvania, he cooked at Emeril Lagasse’s famed NOLA in New Orleans, then as worked as a line cook in Charleston, S.C.  He left the restaurant business for about 1 1/2 years to play drums and guitar in a reggae band and go surfing in Costa Rica.

After “weaning” himself from the band, Schweitzer moved to Wilmington, N.C. and took on increasingly-responsible roles in several restaurants over 14 years.  In 2012, he and his family decided they wanted to relocate to the Tampa/St.Pete area and he began looking for jobs.

During a family vacation to Orlando in 2014, Schweitzer got a call from the executive chef at TradeWinds about a job at the soon-to-be-opened RumFish Grill.

Schweitzer’s job interview lasted for several hours and included a cooking audition at the resort’s convention center. He aced the test, was offered a job on the spot, and moved with his wife and two children to St. Pete shortly afterward where he helped open the new restaurant.

The Cranberry Jam and Walnut Pesto should be made first; up to a few days early.

Combine all ingredients into a medium sauce pot.

Bring to a light simmer.

Continue to cook until liquid is reduced by over a half and sauce begins to thicken.

Sauce will continue to thicken as it cools from the pectin in the cranberries.

Toss with a tablespoon of the extra virgin olive oil.

Season with salt and pepper.

Roast in a preheated oven for 8 minutes.

Combine the rest of the ingredients with the cooled walnuts.

Place into a food processor.

Process until walnuts are no smaller than the size of a lentil.

Season with salt and pepper to taste.

Preheat a grill to a high heat.

Place Mahi Mahi onto the grill and cook 3-5 minutes, marking twice on each side.

When surface of Mahi begins to show moisture, fish can be pulled from grill.

Place Mahi on top of prepared risotto and cooked spinach.

Next week, as part of Seafood Month, we’ll feature Southern Cross Club chef Anu Christopher and his unique rendition of silk snapper. And coming soon, Guy Harvey Outpost fans can enter a sweepstakes to win a Yeti cooler full of fresh seafood catered by Mangrove Mike’s and an assortment of Guy Harvey gear delivered directly to their homes.

Sue Cocking chronicles the Guy Harvey Outpost travel and adventure experience in regular blog posts on GuyHarveyOutpostNews.com.  For 21 years, Cocking covered the full spectrum of outdoors adventure opportunities in South Florida and beyond for the Miami Herald, including fishing, diving, hunting, paddling, camping, sailing, and powerboat racing.  She is a certified scuba diver and holder of an IGFA women’s world fly fishing record for a 29-pound permit.