December 2015 has been the warmest and wettest December in recent memory, but the unseasonable rainfall hasn’t dampened either the inshore or offshore fishing. With water temperatures in the upper 70s to low 80s, gaffer-sized mahi are plentiful within an easy boat ride offshore. Sailfish also are showing up along mainland Southeast Florida and the Keys, with numbers expected to increase as the weather cools off to the north. Reef fishing for grouper and snapper continues to be excellent in the Keys and anglers and guides are still finding plenty of blackfin tuna on the offshore humps. The mackerel bite also is on, with kings beginning to school in the Atlantic and Gulf and Spanish mackerel plentiful on back country wrecks, ledges and rock piles. Inshore anglers are still catching and releasing snook, tarpon, and redfish, and having no problem locating sea trout to take home for dinner.

Captain Cliff Jensen, Guy Harvey Outpost’s director of sportfishing, is happy to arrange an inshore or offshore fishing package for you at the Islander, a Guy Harvey Outpost Resort in Islamorada, as he did for Daniel Escobar of Corpus Christi, Texas recently. Escobar and a friend caught and released five sailfish– their first ever– with captain Aaron Brower on the charterboat, Buzz On. They also caught 18 yellowtail snapper, barbecued some of them that night and packed the rest for home. Then they explored the back country with captain Michael Venezia of Boned Up Charters and brought home a couple of redfish and numerous mangrove snapper to eat.

The Islander Resort, a Guy Harvey Outpost is the headquarters for the upcoming Blazing Mako Tournament & Festival June 16-19th , celebrating inshore and offshore fishing. The festival will also feature Conchservation Village, food, music, paddleboard competition and much more! Book the ultimate father’s day vacation or find out more at the www.BlazingMako.com. Proceeds for the event will be donated to Nova Southeastern University Scholarship Fund through the Guy Harvey Ocean Foundation.

If you are ready to embark on the fishing expedition of a lifetime, check out Guy Harvey Outpost’s Black Marlin Special aboard the three-vessel mother ship operation in Panama run by captain Hennie Marais. Through the end of February, guests have a choice among a variety of fishing packages ranging from $2,600 to $4,900 — depending on the number of guests and length of stay.

“I have fished all over the world on my own boat and on charters, and this was the best experience I have ever had on a fishing trip,” Williams said. “This has got to be the best mother ship sportfish combination in the world, and I congratulate Hennie for putting together a great group 100 percent.”

Isla Mujeres, Mexico is one of the few places in the world where you can catch and release as many as 50 sailfish in a day, then jump in the water and photograph these lit-up pelagics while they harass huge schools of sardines. And you can pile on the thrills by climbing down into a strong, safe, shallow underwater cage, breathing from a hookah rig, and watching fierce-looking mako sharks up close.

Winter is the most wonderful season of the year– not just for the holidays, but for largemouth bass anglers in south-central Florida’s Lake Okeechobee. From December through early spring, big hawgs are readily accessible as they spawn or prepare to spawn in this vast, shallow, freshwater fish factory.

Hillsborough County Sheriff’s deputy Larry Davis of Lakeland, FL and fellow deputy Jeremy Goff recently found out first-hand just how bountiful the bass fishing can be on a guided trip with captain Scott Kerslake. Davis and Goff released 30 bass on a morning outing that Davis won in an online sweepstakes contest conducted by Guy Harvey Outpost.

“Now I know why they call it the best bass fishing experience in America,” Davis said.

He also won a pack of freshwater fishing lures and plenty of Guy Harvey swag.

Big-bass catching isn’t the only sport for which Lake Okeechobee is famous. From now through Jan. 31, hunters from throughout Florida and the southeastern U.S. are taking to the cattail-lined lily pad marshes aiming to shoot a limit of six ducks per person per day.

One of those eager duck hunters is 34-year-old Kimberly McCue of St. Petersburg, FL. McCue has never gone hunting before, but that didn’t stop her from entering and winning Guy Harvey Outpost’s Gamefish, Hunting, and Outdoor Sweepstakes. She will go on a guided duck hunting trip with captain John Miller and receive an assortment of Guy Harvey gear.

McCue plans to get ready for her January duck hunt by practicing shooting sporting clays near her home with a friend.

Guy Harvey Outpost is teaming with Elite Resorts to redevelop the popular Okee-Tantie Campground and Marina on Lake Okeechobee into a world-class outdoors adventure destination. Anticipated reopening is spring 2017.

Guy Harvey Outpost Resorts are celebrating the winter holiday season with creative delicious menus, so even if you don’t fish or dive, you should book a stay to just GHO Chill for the Holidays. Here are some of our Holiday Menu Specials at the Resorts.

Our resorts are planning special New Year’s Eve dinners and parties as well. To GHO Chill with us during the holidays call 800-513-5257.

Our favorite marine scientist/artist/conservationist has been keeping very busy over the holiday season painting, cruising and making special appearances. After christening the new Norwegian Cruise liner decorated with his artwork at PortMiami, Guy Harvey cruised to St. Thomas, Tortola, and Nassau before returning to Miami. Later, at home in Grand Cayman Island, he began work on new paintings and was presented with a signed life ring by the crew of a U.S. Coast Guard cutter. Afterward, he returned to Florida where he appeared at stores in Jacksonville, Stuart, Boynton Beach and his Davie headquarters to sign his limited-edition, 30th anniversary shirts.

Members of the Guy Harvey Outpost crew will be very busy spreading the #OutpostAttitude message at outdoors sports shows at the Dallas Safari Club Jan. 7-10; Garden State Outdoor Expo Jan 7-10; the Florida RV Supershow in Tampa Jan. 12-17; the Stuart Boat Show Jan. 15-17; and the Chicago Outdoor Sports Expo Jan 20-24. Stop by and see us! In the meantime, happy holidays!

We would like to know what you think of our newsletter. If you have questions, comments or suggestions, email scocking@guyharveyoutpost.com. 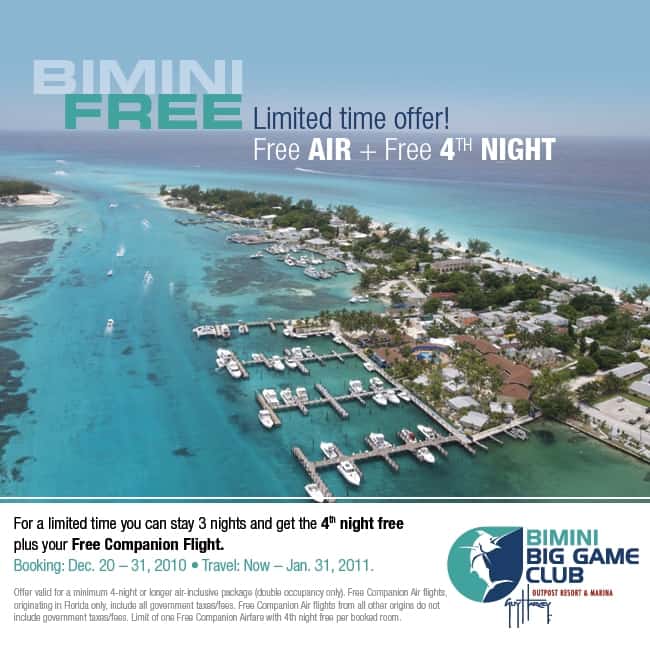 Just in time for the our New Year’s Eve Holiday Boat Parade and Pool Party – for a limited time, stay at the Bimini Big Game Club for 3 nights and get the 4th night free, along with complimentary …