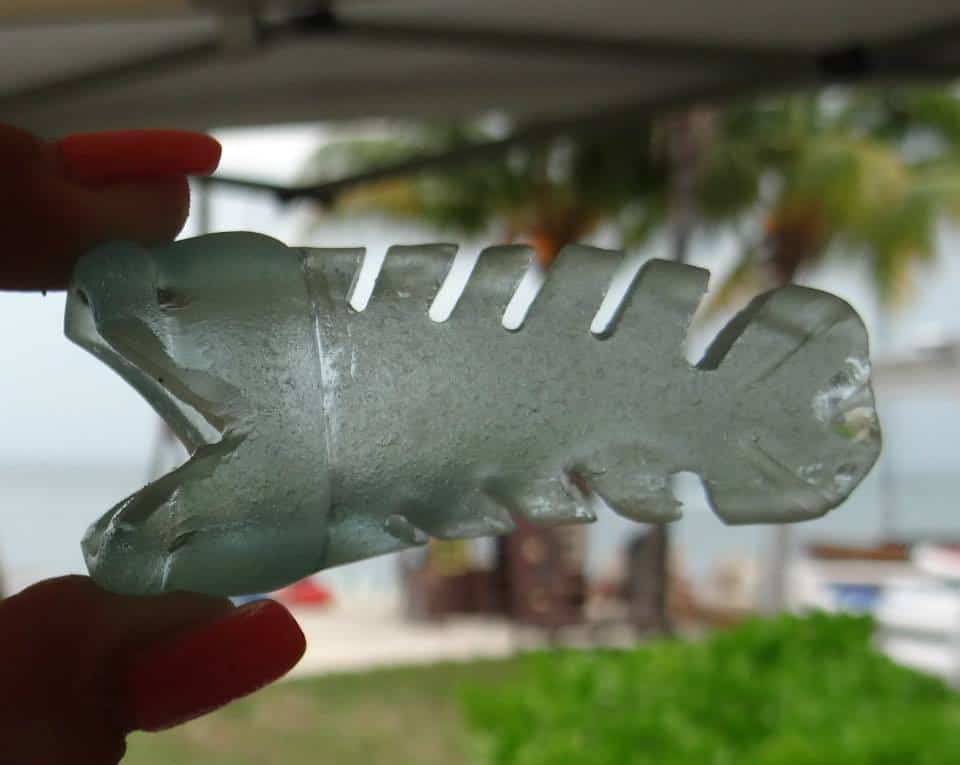 While a fleet of anglers chased mahi and wahoo in Guy Harvey Outpost Resorts’ Bonfire Tournament on West End, Grand Bahama Island in June, artist Bobby Little stayed behind, keeping very busy at a table in the shade of Old Bahama Bay Resort as part of the “Trash To Treasure” initiative of the Bonfire Series.

One of several artists to be featured in the Guy Harvey Outpost “Trash to Treasure” program, Little used a wet saw and grinder to demonstrate for local artisans and resort guests how to turn waste conch shells into fashion jewelry.

Over a few hours, the piles of discarded shells were crafted into beautiful designs of angelfish, sea turtles, mermaids, pelicans and dolphins.

Guests purchased the finished products for $10 to $20 apiece, with a portion of the proceeds going to local vendors. Spending about $1,300 for tools and supplies, Little says, a Bahamian artisan could set up at a resort and make back his or her investment in about two days.

“One full-size conch shell is worth $300 to $500 when it’s cut into jewelry,” Little said.  “You could create an industry on every island.  Anyone who wants to work can work.  Now you have a product made in the Bahamas you can sell in the Bahamas or you could export.”

The Bonfire Beach Bash & Tournament at Old Bahama Bay featured Little– a 53-year-old Hollywood, Fla. native who has lived on Rum Cay near San Salvador for decades and who doesn’t limit his artistic vision to mounds of conch shells.  On his frequent beach strolls, he collects washed-up plastic and turns it into trinkets; fashions rings out of whelk shells; converts dead coral into candle holders and lamps; and is best known for his dramatic ‘burning’ wahoo and marlin sculptures made of scrap metal.  A 16-foot wahoo filled with flaming palm fronds and smoldering charcoal dramatically lit up the post-tournament Beach Bash. Both the wahoo and marlin are expected to be turned into artificial reefs that create habitat for marine creatures and attract divers.

Guy Harvey Outpost Resorts proposes to launch a series of beach clean-ups combined with fishing and art festivals in the Bahamas and South Florida where artists would collect trash, turn it into something beautiful, and compete for prizes for the best creations.  Proceeds would be put toward ocean conservation.

“It will benefit the artists, the islands– anywhere there’s trash,” Little said. “And there’s such a large demographic that follows Guy Harvey’s name.”