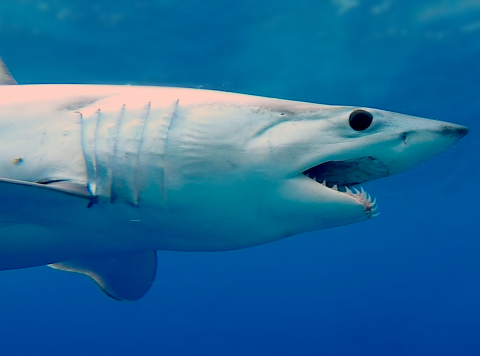 Working with Captain Anthony Mendillo and his Keen M Blue Water Fleet, the scientists implanted 12 makos up to 250 pounds with satellite tags that track the animals’ movements for up to two years.  That brings the total of makos tagged to 46.

One of the tagged sharks named “Jack Hanna” after the animal expert and television host has already reported by surfacing and beaming his track to a satellite which then sent the data to the Institute.

You can follow the progress of Jack Hanna and others in real time by going to cnso.nova.edu/sharktracking/adopt/.

The expedition marked the first time Jessica Harvey–project manager for the Guy Harvey Ocean Foundation–got to tag a shark.

“It required all hands on deck.  They are very strong animals,” she said.

Three boats involved in the project –including a television crew with South Florida Captain Rick Murphy’s “Sportsman’s Adventures” –used bonito chunks to chum up the makos.  They caught them on heavy tackle and reeled them up to a special mobile platform on the stern where they irrigated their gills with seawater while implanting the SPOT tag in the dorsal fin.  Jessica Harvey said the procedure took between five and eight minutes and all sharks appeared in good shape upon release.

But before catching the sharks on hook-and-line, everyone took a turn in an underwater cage to observe and film the animals.

“They’re so amped up.  They bite everything.  That’s why we use the cage,” Guy Harvey said.

Action video of the sharks as well as their computer tracks are displayed on screens adjacent to the Mako rollercoaster at SeaWorld in Orlando.  SeaWorld sponsored five tags on the most recent expedition. The rest were funded by the Guy Harvey Ocean Foundation.

The expedition fuels a larger study by Guy Harvey Research Institute head Dr. Mahmood Shivji and colleagues tracking makos in the Western North Atlantic and the Caribbean and Gulf of Mexico.  Out of 26 makos tagged previously off Isla Mujeres and Ocean City, Md., 28 percent have been caught and killed by commercial longline vessels.

The harvested sharks ended up in five different countries after travelling through the waters of 17 nations.

So far, the research has shown that makos, which are prized for their meat and fins, may be at higher risk for overfishing than previous conventional tagging studies suggest.  Harvey said more sharks will be tagged in Ocean City this month, aiming for a sample size of 60 or more.

Getting high-quality data on shark movements from the SPOT tags is key to their conservation, Jessica Harvey said.

“Sharks are long-lived animals that produce relatively few young,” she said.  “At the rate they’re being removed, it’s important we educate people about shark ecology and make management decisions appropriate for the species.  We need to make sure that sharks such as makos don’t decrease to the point of no return.  It’s very important for ocean conservation as they are apex predators and play a large role in the ocean ecosystem.”