Capt. Tony DiGiulian Teaches How to Catch Wintertime Wahoo at the IGFA’s School of Sportfishing next Monday, December 15, 2014, 7-10pm.

Known as one of the fastest fish in the ocean, wahoo don’t last long on a dinner plate either.    Capt. DiGiulian’s class will teach anglers how to target and more consistently catch wahoo in the cooler months of the year.  He is co-founder of the IGFA School of Sportfishing and has lectured on fishing techniques around the world through his Saltwater Professional Consulting.

Unlike most locales where wahoo are often considered incidental catches due to their somewhat nomadic and loner nature, at Old Bahama Bay, a Guy Harvey Outpost Expedition Lodge they are  caught consistently October to March.   Double and triple headers of wahoo are relatively common during the season. One-hundred pounders are caught each year in the Bahamas. Wahoo grow quite large with the all tackle record reaching 184 pounds. Just north of Old Bahama Bay is the area known as “Wahoo Alley.”  This stretch, where the Little Bahama Bank meets the Gulfstream, gets special recognition on fishing charts.   Wahoo also make great table fair  and can be found at your local sushi bar as Ono.  To celebrate WAHOO Season, Guy Harvey Outpost is hosting the Wahoo Bonfire Festival and Tournament at Old Bahama Bay February 26th – March 1st 2015.  The Wahoo Bonfire Festival will feature a variety of activities including a Burning Wahoo Sculpture by artist Bobby Little.

The Wintertime Wahoo Techniques class will be held at the International Game Fish Association’s  Headquaters in Dania Beach, FL.   Cost per class is $100 USD for IGFA members and $150 USD for non IGFA members.  The fee covers the cost of the class, course materials, and tackle used for activities during each class. For more details call Anthony Vedral at 954-924-4254 or e-mail avedral@igfa.org 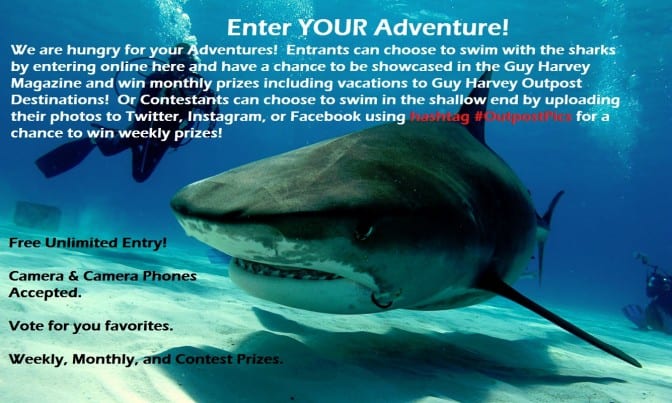 The Raw Power of the Oceanic White Tip Shark

While on a joint Guy Harvey Ocean Foundation/Guy Harvey Research Institute Expedition off Cat Island in the Bahamas, Guy Harvey and friends filmed the aftermath of an encounter between a hooked marlin …