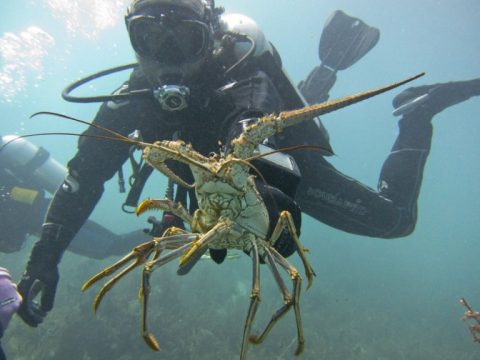 Florida’s office cubicles will be emptier than usual. Florida Keys lodgings will be chock full. And the Atlantic Ocean, Gulf of Mexico, Florida Bay and Biscayne Bay will see so many boats flying red-and-white dive flags that you could almost step from one to another without getting your feet wet. All this can mean only one thing: Florida’s annual lobster diving mini-season July 27-28.

Thousands of snorkelers, scuba divers and bully netters will converge on the waters of the Sunshine State– especially the Keys– striving to catch their limit of spiny crustaceans –six per person per day in the Keys and Biscayne National Park and 12 per person per day everywhere else. And, by most accounts, lobster hunters stand an excellent chance of getting the job done.

“In general, we think this is going to be a good year,” said Tom Matthews, a veteran lobster research administrator with the Florida Fish and Wildlife Conservation Commission in the Keys.

Captain Slate’s Scuba Adventures, a Guy Harvey Outpost Outfitter in Islamorada, will conduct two lobster diving trips daily during mini-season, offering 10 percent off for two-buddy teams. Slate says his favorite hot spot– a shallow reef he calls the Aquarium–has plenty for the taking, and other nearby reefs abound with bugs as well. To book a trip call 305-451-3020.

If you haven’t been lobster diving for a while, you might want to attend one of several pre-season dive safety seminars being conducted by Divers Alert Network (DAN) around South Florida through July 26. For a complete schedule, go HERE.

And before you head out on the water, make sure you know and understand Florida’s lobster regulations. Go to HERE for a complete rundown. You can also stop at an information booth at Key Largo’s Waldorf Plaza shopping center, milemarker 100, U..S. 1 from 10 a.m. to 6 p.m. July 23-26 where staffers from the Florida Fish and Wildlife Conservation Commission (FWC) and Florida Keys National Marine Sanctuary will answer all your bug-related questions.

Waters will be heavily patrolled by law enforcement officers from the FWC, U.S. Coast Guard and other marine units writing tickets for resource and boating safety violations. Fines are hefty, and the most serious violations could land you in jail.

While hunting for lobsters, you are very likely to come upon lionfish–those pesky, venom-spined invaders from the Indo Pacific. Both lobsters and lionfish lurk in coral caverns and beneath ledges. To encourage divers to remove more lionfish from Florida waters, the FWC will allow you to take one lobster per person per day over the bag limit IF you submit proof that you have harvested 50 or more lionfish before July 27. And that is not the only incentive the FWC is offering. For details, go HERE.

It’s almost time to take your shot at being the hero of the neighborhood seafood cookout. So, it might not be a bad idea to plan on setting some of your lobster catch aside for your boss at work–especially after he or she finds out you really didn’t skip out to attend your late Aunt Maude’s funeral in Des Moines. Happy hunting!

Sue Cocking chronicles the Guy Harvey Outpost travel and adventure experience in regular blog posts on GuyHarveyOutpostNews.com/. For 21 years, Cocking covered the full spectrum of outdoors adventure opportunities in South Florida and beyond for the Miami Herald, including fishing, diving, hunting, paddling, camping, sailing and powerboat racing. She is a certified scuba diver and holder of an IGFA women’s world fly fishing record for a 29-pound permit.

A group of marine scientists sits before a computer screen in an air-conditioned command center in Fort Pierce, watching intently as a robot plucks a sea sponge from deep on the ocean floor that just might …