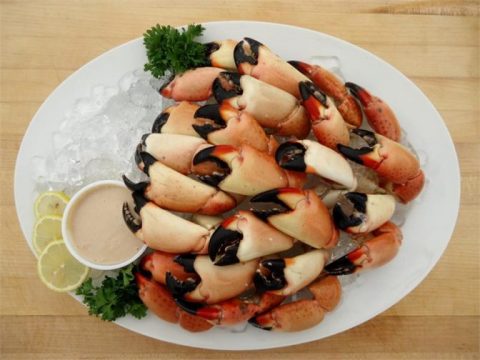 Stone crab season opens Oct. 15 through May 15 statewide, but most of the harvest occurs in the Gulf of Mexico from the Keys north to the Panhandle.  Licensed commercial trappers can take as many claws as they want as long as each measures 2 3/4 inches or more. Recreational divers and trappers are limited to one gallon of claws per person or two gallons per boat, whichever is less.  Crabs must be released alive to regenerate new claws which can take about 18 months.

Stone crab lovers may enjoy a bountiful feast this fall–like last season–or not.  The 2015-16 season was the best in years with fishermen landing around three million pounds of claws worth $33 million.  That’s way better than in 2013-14 (1.98 million pounds) and 2014-15 (2.2 million pounds).  But it’s no predictor for 2016-17, according to research scientist Ryan Gandy at the Florida Fish and Wildlife Research Institute in St. Petersburg.

Gandy said last season’s opening saw a “good pulse of crabs go through, a lot of really big crabs around and a good number throughout the fishing season.”  But he doesn’t expect the same this year based on pre-season surveys of the crabbing grounds.

“We’re not seeing the volume of crabs as last year.  We’re seeing the normal volume,” Gandy said.  “We don’t know how good of a season it will be, but it won’t be the same as last year.”

Gandy said the first six weeks of the harvest season will be a good indicator for the remainder.

About 60 percent of Florida’s stone crab landings come in the Keys, Everglades City, and Naples.  One of Florida’s largest stone crab purveyors– Keys Fisheries in Marathon–will celebrate the season with its sixth annual  Stone Crab Eating Contest Oct. 22.  Prizes will be awarded to the contestants who consume 25 stone crab claws in the fastest time.  Under the rules, you have to crack your own crabs, and throwing up is not allowed.  Proceeds benefit the Marathon Recreation Center.  To register, go to www.KeysFisheries.com or call 305-743-4353.

You can celebrate Seafood Month and stone crabs even sooner at the 47th Cedar Key Seafood Festival Oct. 15-16, hosted by the Cedar Key Lions Club.  The region has made a strong recovery from Hurricane Hermine and was untouched by Matthew, so festival organizers are eager to showcase a rich array of fish, shrimp and crabs both on-site and at local restaurants.  The event also features a parade, music and some 200 arts and crafts booths.  Admission is free.