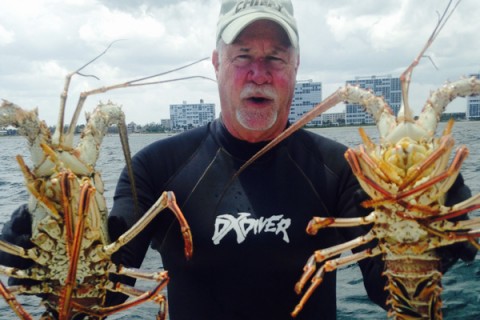 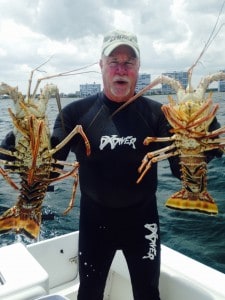 Lobster hunters have two more weeks to bag a limit of tasty entrees before Florida’s harvest season closes on April 1.  Whatever you catch will have to tide you over until the annual two-day lobster mini-season July 27-28.

Here are some tips from three South Florida lobster diving experts for getting your limit of six per person per day:

“You’ll be way better off in eight to 15 feet of water just inside the reef,” Billips said.  “Look for a solitary coral head in a sandy area.  Where you see one [lobster], there’s a chance there will be two or three in the same head.”

Billips and his companions recently caught four large lobsters near Hens n’ Chickens Reef– including a four-pounder.  His preferred method is to use a net and tickler stick instead of a snare or ‘bugger’.

“Be super chill, not real aggressive, tap-tap-tap real gently behind them,” he advised.

It’s illegal to spear lobsters in Florida, but it’s perfectly okay to add to your haul by spearing some exotic lionfish, which frequent the same habitats as the crustaceans.

Like Billips, Miami Beach captain Abie Raymond is finding plenty of super-sized bugs on isolated coral heads in the shallow waters from South Beach to Haulover Inlet.  If you don’t know where these coral heads are, Raymond said, follow the fish.

“If you see blue tangs, chase them and they will 99 percent of the time lead you to a coral head you didn’t know was there,” he said.

Biscayne Bay, the captain said, has not been as productive as usual due to this winter’s unseasonable record rainfall.

Raymond, a free diver, uses a tickle stick and his bare hands to catch dinner.

“I tickle-stick them out and wiggle my fingers on my left hand and the lobster will put out his antennas,” Raymond explained.  “Then I put my [right] hand on the back of his tail.”

Few scuba divers are as successful at harvesting lobster in Broward County’s urban waters than Jim “Chiefy” Mathie of Deerfield Beach and his regular dive crew.  The author of the popular how-to manual “Catching the Bug” says the late-season hunter’s best bet is to hit the east side of the third reef 75 to 85 feet deep, weather permitting.

“I can almost guarantee they’ll be out there,” Mathie said.  “It’s been bumpy.  The visibility hasn’t been the best due to rain and wind. The weather has kept people in. We’ve had an outstanding year.  Almost every time we went out, we got our limit or almost our limit.”

Mathie prefers the snare over the net and tickler stick.

“It’s hard to get them out of the net,” he said.  “I use my snare like a tickler stick, withdrawing the loop and tickling them out.  As soon as you’ve got that loop around the tail, you’ve got ’em.”

Before you hit the hunting grounds, make sure you have a valid Florida saltwater fishing license and a lobster permit.  To be legal, a lobster must measure greater than three inches on the carapace or head, and you must use a lobster gauge to measure it in the water.  Taking egg-bearing females is prohibited.  You must display a red-and-white diver-down flag whether you are diving from a boat or from shore.  For a complete list of lobster regulations, visit the MyFWC web site. 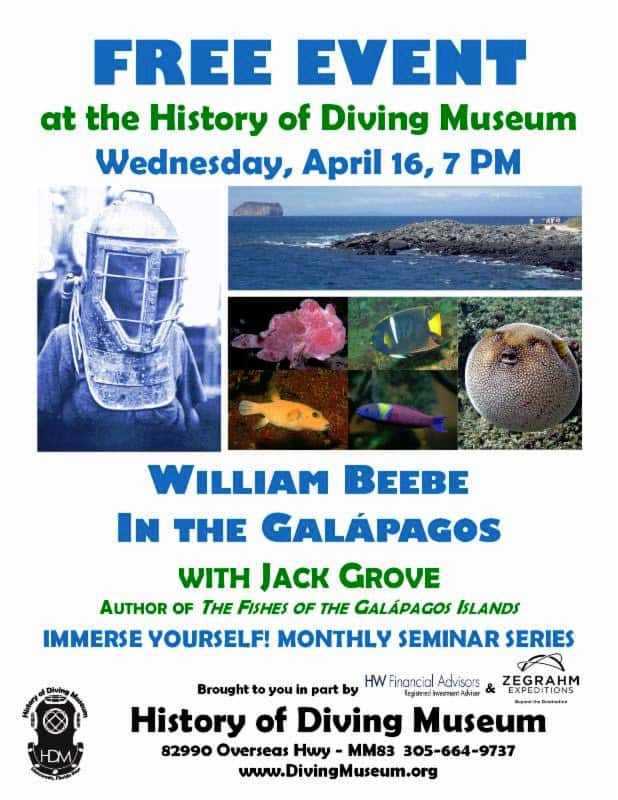 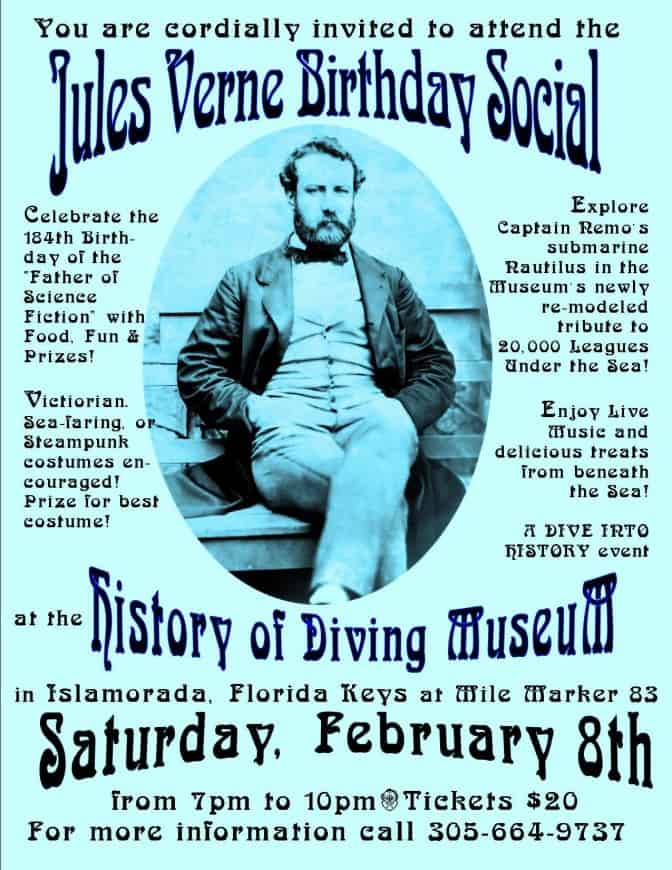 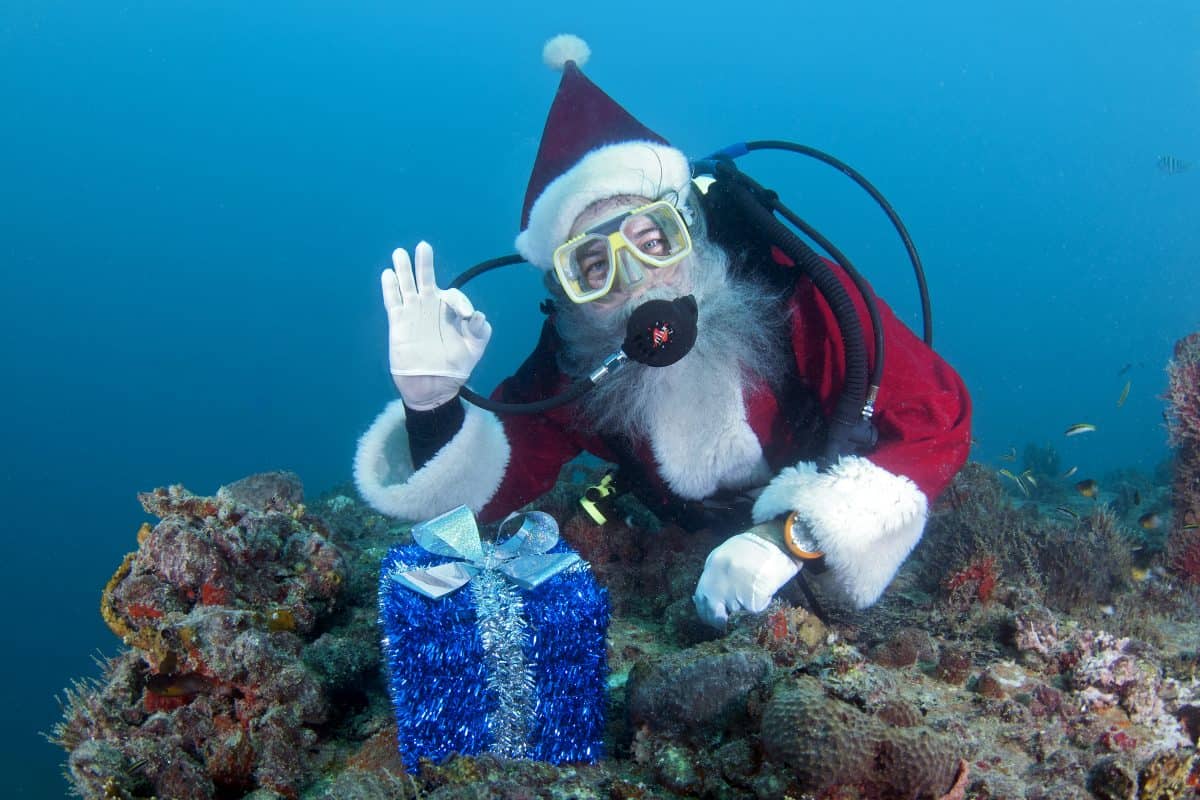 It turns out that Santa Claus carries more than toys in that reindeer-driven sleigh:  a set of scuba tanks.  And you will have two opportunities to dive underwater, sit on his lap, get your photo taken, …