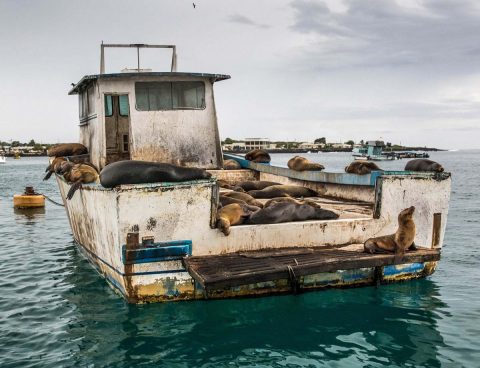 Just a few of the images from the highlight reels of a handful of avid wildlife photographers who joined Guy Harvey Outpost’s inaugural May photo safari to the Galapagos Islands.

The expedition was led by veteran Sports Illustrated photographer Ron Modra who served as both guide and mentor to the group.  But Modra said he didn’t have to do too much mentoring.

“Everybody we had on the trip was fairly well accomplished,” Modra said.  “I think they got some really great stuff.  I didn’t let them leave a location until everybody had what they wanted.”

Unlike guided cruise ship expeditions to the Pacific islands about 600 miles off Ecuador, this itinerary was land-based and covered five islands in eight days.  The photographers stayed in hotels at night, traveled by boat to the islands, and hiked and snorkeled at their own pace to obtain the images they wanted.

Naples, FL photographer Diana Calleja got many great shots of boobies, frigate birds, iguanas, and sea lions, but one image she coveted eluded her:  the tropicbird, noted for its bright red bill and long, white-feathered tail.

“It’s just magnificent.  They are so fast.  I’d like to go back maybe next year and get that shot,” Calleja said.

Calleja’s trip got off to an unfortunate start; on the second day, a broken strap plunged her camera into the ocean. Only the memory card was spared.

And for the remainder of the trip, using borrowed gear from her fellow shooters, Calleja scored nearly everything she wanted–lying flat on a path between lava rocks to get photos of baby boobies; swimming with sea lions “just doing this ballet around you”; tripping over her own feet when a mama sea lion scolded her for getting to close to a baby.

The Galapagos revealed itself in different ways to all the photographers.  Dunn was flipping through some images one night and nearly deleted one he had shot from a cliff while trying to capture birds in flight.  But upon closer examination, he discovered he had captured a superb image of a large rock covered with marine iguanas, including one he said looked like Godzilla.

“There’s stuff hidden in the rocks all over the place,” Dunn marveled.  “You almost need a spotter when you’re looking through the lens:  ‘Hey!  Coming in at 2 o’clock!'”

Dunn was enchanted by the rich diversity of wildlife — from the colorful Sally Lightfoot crabs perched on the rocks to the sea lions reclining on park benches.

“I thought I’d sneak over by one and he jumps up and barks at me,” Dunn said.  “The big males are doing that alpha thing all the time.  They look like they’re trying to kill each other, but they’re not.”

Dunn owns a warehouse in Nashville, Tennessee’s arts district where he’s putting together the Lensmen Project– a gallery of nature photography by travelling shooters.  He said the Galapagos trip spurred him to get serious about it.

Improving his skills with Modra, he said, is “like getting to paint with Picasso.  And Ron is great fun.”