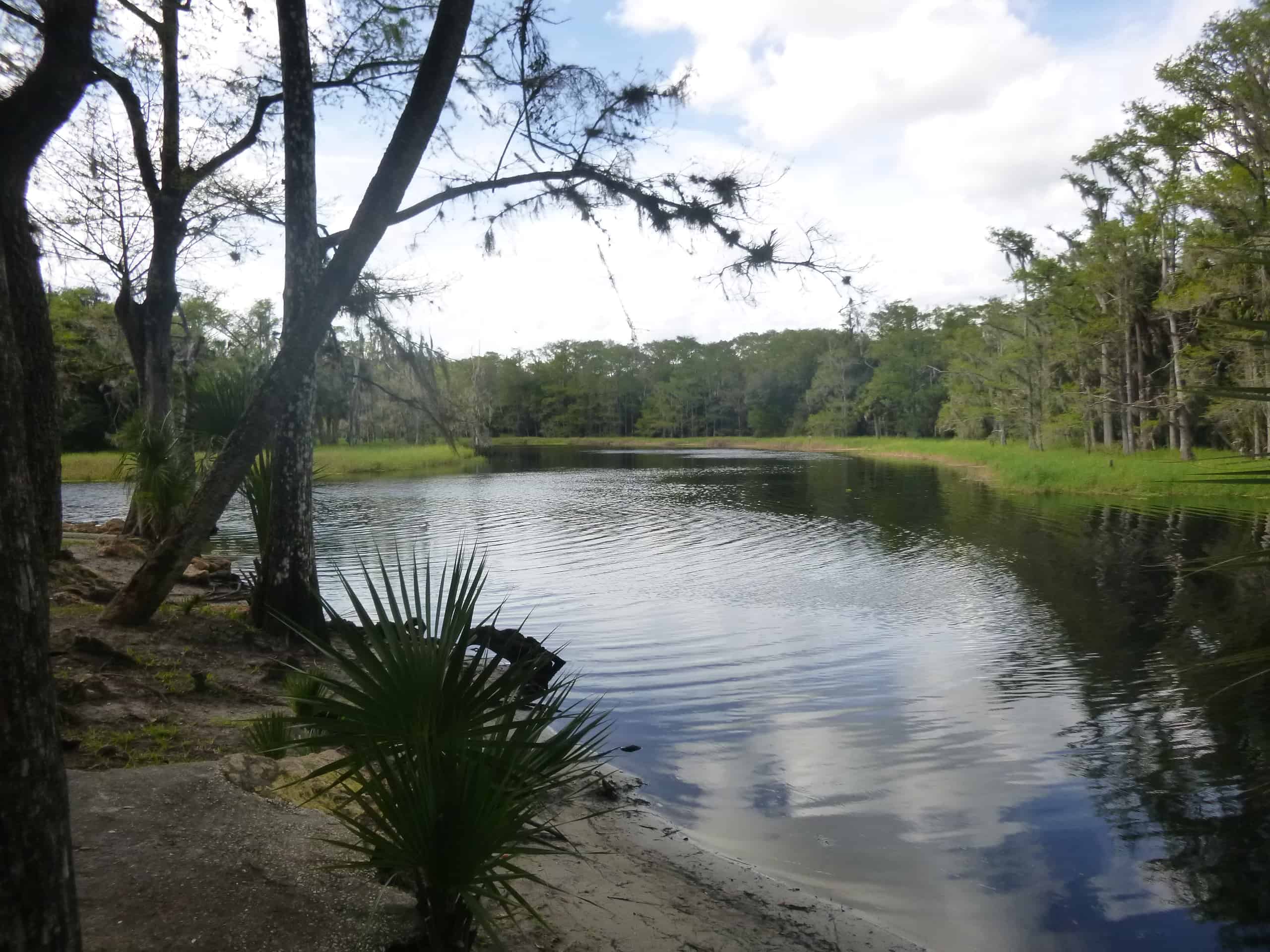 [Palmdale, FL–] A paddler would be hard-pressed to find a more scenic, tranquil waterway in South Florida to explore than Fisheating Creek.  Unlike many in the region, its water levels are not manipulated by humans, but dependent entirely on rainfall. No buildings line its banks except for the small office at the Fisheating Creek Outpost campground in tiny Palmdale.  Mostly, it’s just you in your kayak or canoe– maybe an occasional hunter passing by in a john boat– and gators, birds and frogs for miles around.

Fisheating Creek– derived from a Native American phrase for ” the creek where fish are eaten”–lives up to its name.  It’s loaded with bass, bluegill, and bream.  Flowing gently south and east from rural Highlands County for about 50 miles to Lake Okeechobee, the creek is a narrow, shady, shallow haven for wildlife.  If you are quiet, you might spy deer, wild turkey, and hogs as you glide by.  The state of Florida controls the creek corridor, maintaining public access while the upland regions are mostly cattle pastures owned by the agribusiness giant Lykes Bros.

I enjoyed a nearly effortless seven-mile paddle down the creek at year’s end, buoyed by unseasonably high water levels from recent rains that required no wading nor dragging my kayak over shallow sandbars.  Sunny, breezy weather tamped down annoying insects and made for a comfortable three-hour float downstream.

An Outpost shuttle driver transported my kayak and me to the put-in site popular with day-trippers called Burnt Bridge.  Had I desired a longer trip, I could have been shuttled further north to Ingram’s Crossing– a 16-mile, full-day or overnight excursion.  Using the Outpost shuttle is the only way to access the creek upstream from the campground because you have to pass through several locked gates on Lykes property to get there.

Decades ago, paddling almost the entire length of the creek to its terminus in Lake Okeechobee was possible, but not today.  The shuttle driver told me it is paddle-able for about 45 minutes south of the campground to a spot called Rock Lake.  Beyond Rock Lake, he said, the stream is too choked with vegetation to continue.

No matter.  I had plenty of spectacular natural scenery and wildlife to occupy me for my entire trip.  I glided through towering cypress forest with many boughs still bright green despite the winter season.  Their knobby knee roots lined the creek banks like columns of small soldiers.  Overhead, crows, herons and ibis called, squawked, and grunted as I floated by.

I think I had only been underway for about 20 minutes when I came upon my first gator– a five-footer sunning itself on a sandbar.  I slowed down, and barely was able to snap off a photo before it slid into the creek and disappeared.  Over the next three hours or so, I passed another 14 of the reptiles, one of them a jowly monster that looked to be about ten feet long.  Without exception, they either ignored me or departed quickly at my approach.  For some reason, I didn’t see any snakes or turtles.

Since it was a weekday, watercraft traffic was light.  I came upon exactly one small motorboat and a party of three kayaks.

“You’re the first person we’ve seen for days!” joked one of the paddlers.

It is theoretically possible to get lost on Fisheating Creek, but you would have to try really hard.  The route is marked with small directional signs and blue blazes on the trees.  If you ever find yourself between markers, uncertain how to proceed, simply go with the flow– following the strongest line of current downstream.

I stopped for lunch at a scenic sand spit dubbed Nude Beach on my trail map.  It was deserted; no naked people anywhere around.  However, as I munched on chicken tenders, I did spy two tail drags in the sand that doubtless were made by nude alligators.

Fish splashed and birds conducted me from the tree canopy as I continued downstream. Then I came upon a startling sight:  a large, gray, roundish structure about six feet tall attached to a tree on the left bank. Peering closer, I saw that it was a really big wasp nest!  I snapped a photo and pushed quickly away.  Not long after that,  I arrived back at the campground.

What a fun morning it had been.  Beautiful scenery, non-threatening wildlife and no bug bites.  I’ll have to do the long version next time.