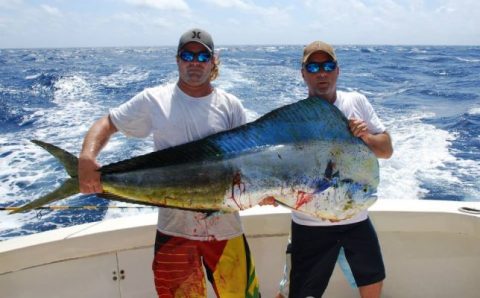 So you think dolphin fish are easy to catch in the Florida Keys?  After all, they are plentiful this time of year and don’t often refuse a bait– live, dead or artificial.   So now let’s see what you’ve got:  test your fly fishing skills against this colorful and tasty species in the inaugural Islamorada Dolphin Fly Tournament.

Held July 10-12 out of the Islamorada Fishing Club, a fleet of up to 20 boats with teams of three anglers each will vie for cash and prizes for both weighing and releasing offshore fishing’s most popular species.

The top prize will be awarded to the team weighing the six heaviest mahi over two days of fishing.  Awards also will be presented for the highest total number of releases and for top junior angler.  You may fish in your own boat or hire from your choice of Keys charterboats.

“You don’t have to be a great fly fisherman,” Harbaugh said.  “It’s not as technical as tarpon, but you still have got to be able to cast the fly.  There are big fish out there.”

Entry fee is $1,200 per team.  For a complete rundown on the rules and schedule, go to:  www.islamoradaclassic.com/fly-dolphin-tournament/.

To book a room during the tournament at the Islander Resort, a Guy Harvey Outpost in Islamorada visit GuyHarveyOutpost.com or call 1-800-513-5257 for reservations.