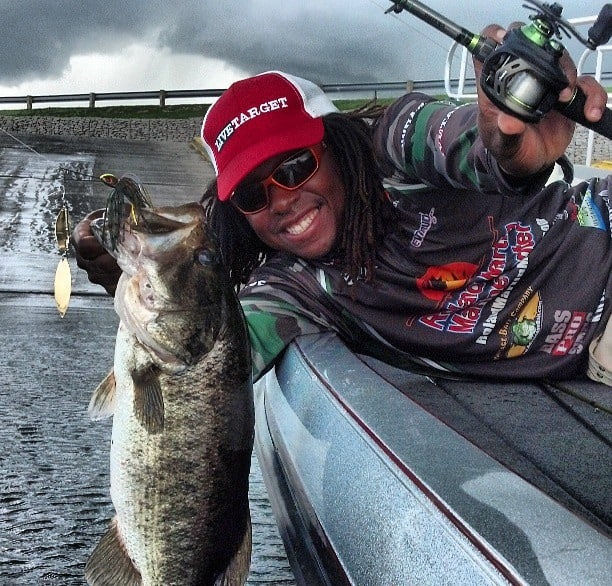 When the Food Network’s hit series “Chopped” premieres Dec. 3 at 8 p.m., four pastry chefs will compete to create sumptuous chocolate dishes for the host and judges.  One of the contestants is Fort Lauderdale’s Anthony Hunt, 39, corporate pastry chef for the Restaurant People group that operates popular eateries YOLO and S-3.  But Hunt is unique–he’s the only professional bass tournament angler ever featured on the show.

With the nickname “5oz” representing the margin by which he lost a tournament a few years back, Hunt is preparing to break into the bass fishing majors– the Wal-Mart FLW Tour and the Bassmaster Elite Series– in 2016.  But he still keeps a foot in the kitchen and spends time with his four children aged 1-14.

With a high social media profile and Internet prominence on both angling and foodie sites, Hunt has been able to attract both fishing industry and non-endemic sponsors to further his tournament quest– something that many would-be bass pros have had difficulty doing.  He’s as likely to get hits and ‘likes’ for promoting a chocolate maker as a plastic frog lure.

“No one’s ever had a chef on board as pro staff,” he said.  “I can grab the two audiences at one time.”

Hunt has been a professional chef for 15 years, but he has aspired to a professional bass fishing career since he was seven years old watching Larry Nixon catch the big ones on television.

The first step in his quest will be the FLW Rayovac Tournament on Lake Okeechobee in Clewiston  January 14-16– one of the qualifiers for the national tour.

To score a paycheck, he needs to spend a lot of prep time on the water.

“I approach it like a new lake every time I’m up there,”  he said of the 730-square mile Big O.  “I go fishing like I’ve never been there before. I try to keep an open mind on what you’re going to have to do to catch ’em. The ‘home court’ can hurt you.”

Hunt is hoping for cold weather because he “fishes stronger” under those conditions.  But he’s ready for whatever.

Meanwhile, he’s enjoying his time in the culinary spotlight on “Chopped”.

Skewer fish rectangles three quarters of the way into the flesh.  Pat dry with paper towel.  Roll the fish into each spice or herb to coat all sides.  Sear fish in olive oil in a medium sauté pan on medium-high heat, flat sides down, for 30 seconds on each side or to desired done-ness.  Remove from heat.

Slap on the sauce of your choice, such as homemade guacamole; lemon-garlic mayo; or classic sriracha.

From late summer into early autumn, the flats of the Florida Keys are prime territory for scoring an inshore super grand slam of bonefish, tarpon, permit and snook– all caught in one day. And as …