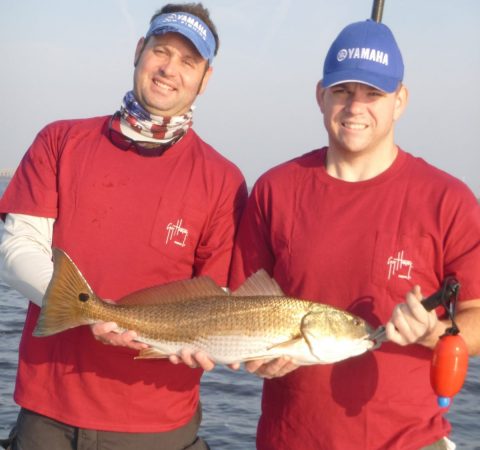 It was on a Veterans Day a few years ago that Jacksonville sport fishing captain and radio host Rick Ryals got inspired:

“It came to me that my dad spent World War II in Germany while my mom was a field nurse in Italy.  They built a family that included my brother who was a fire base commander in Vietnam before his son helped lead the initial assault on Baghdad.  I grew up to marry a girl who was a Naval radio operator.  And I spent my whole life fishing.  When you suddenly realize your whole family served, except you, you’re like, ‘well, I better do something.'”

So, about four years ago, Ryals founded “Fishing for Warriors” –a network of inshore and offshore guides on both coasts of Florida who escort military veterans on free fishing trips.  The Guy Harvey Ocean Foundation and Yamaha Motor Corporation are supporters.

Ryals estimates his group has conducted more than 150 veterans’ outings since “Fishing for Warriors” was launched, with the most recent held earlier this month in Jacksonville’s inshore waters.

Captain Matt Davis escorted U.S. Marine Corps veteran Adam Lewis– a double Purple Heart honoree who lives in Yulee–to catch seven redfish in a half-day of fishing in Mill Cove.  Lewis kept a couple to eat and released the others.  He used live shrimp and mullet for bait.

Lewis, 31, married and a father of three young daughters, doesn’t own a boat and doesn’t get many opportunities to go fishing, so he really enjoyed himself.

“I don’t even have to catch fish,” he said.  “Being out here is peaceful enough.  Having fish in the fridge–it’s just a bonus.”

After several harrowing years as an infantryman in Iraq, Lewis relishes the peace and quiet of a secluded bay.  His first Purple Heart was awarded after a concussion blast from an improvised explosive device perforated his eardrum.  His second came after a sniper round went through his helmet, fractured his skull and injured his optic nerve.  Known as the platoon joker, he was wisecracking with rescuers in the Humvee that rushed him to the hospital.

“In a combat zone, if you don’t laugh a little, you’ll go nuts,” Lewis said.

He recovered from his injuries, retired in 2007, and earned a bachelor’s degree in information technology at Florida State College in Jacksonville. A few days before he went fishing with Davis, he received a job offer.

It was a VERY good week.

DANIA BEACH, FL—SEPTEMBER 22, 2011—A group of internationally acclaimed marine artists, including Dr. Guy Harvey, Wyland and sculptor Kent Ullberg, will be among the featured artists in the Art …