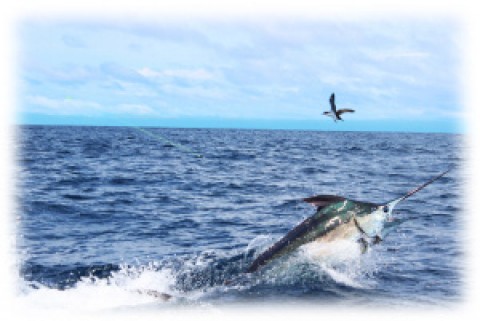 Steve Schniedman, experienced Florida offshore fisherman, has traveled the world, catching and releasing blue, white, and striped marlin. But the fourth element of the superfecta– black marlin– eluded him until recently when he visited the pelagic-rich Pacific waters off Panama with several members of the Guy Harvey Outpost Resorts team.

Fishing aboard a 66-foot Buddy Davis yacht piloted by the crew of Panama Yacht and Fishing Charters– a Guy Harvey Outpost Expedition outfitter– Schniedman hooked a black estimated at between 300 and 400 pounds using a small live tuna for bait.

“It was the fight of a lifetime– a crazy fight,” Schniedman said. “He took a lot of line. We were full-throttle backing down just to keep up with him. He jumped five or six times.”

Schniedman had his hands full– literally–fighting the huge billfish on 50-pound tackle, but he eventually reeled it close enough for the crew to unhook and release it.

“The best trip I’ve ever been on,” he said afterward.

Not only was the fishing spectacular, according to Schniedman, but the experience of living aboard a 98-foot luxury Knight and Carver mother ship was first-rate. 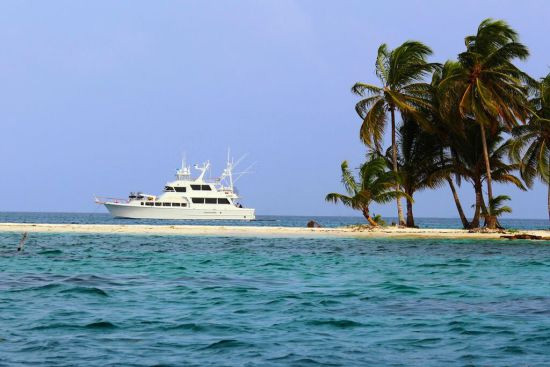 “The mother ship we lived on was absolutely beautiful,” he said. “The crew, the food, the chef–everything was five-star. I’d certainly go down and fish on that boat again.”

A typical day involved waking early, catching live bonitos and skipjacks along the Zane Grey Reef, then trolling the livies along the reef for the blacks. When the sun grew warmer, the crew headed to the deeper offshore waters of the Hannibal Bank. At sundown, the boat made another pass along the reef before returning to the mother ship– “a floating luxury lodge”, according to GHO president Mark Ellert.

The fishing wasn’t the only draw, according to the group. One evening, the mother ship was visited by a party of villagers in dug-out canoes laden with handmade arts and crafts.

“A virtual shopping center,” Ellert marveled, adding that everyone bought some treasures to take home.

While the black marlin season is winding down along Panama’s Pacific coast, spring and summer present bountiful opportunities for catching large yellowfin tuna and Cubera snapper. To book your adventure, visit http://bit.ly/1PJkI2b or call Jensen at 954-243-1178 or email cjensen@guyharveyoutpost.com.

Better hurry up or Schniedman might elbow you out of the way.