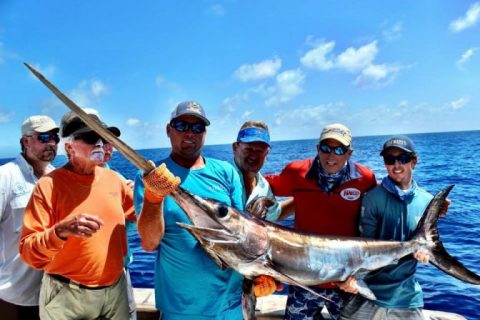 Daytime swordfishing was a lost art in the Florida Keys until a little over a decade ago when the Stanczyk family –owner/operators of Bud ‘n’ Mary’s Fishing Marina in Islamorada–decided to revive it. Drawing from the research and writings of IGFA Hall of Famer Ruben Jaen of Venezuela, marina owner Richard Stanczyk– along with son Nick, brother Scott and friend Vic Gaspeny–developed successful techniques for catching swordfish at depths of more than 1,000 feet at all times of the day. As news of their achievements spread, Bud ‘n’ Mary’s became renowned as the day dropping center of Florida and beyond.

On a recent outing just after the September full moon, Nick and crewman Chase Fulton guided Enrique Zamora of South Miami on his 29th birthday to his first-ever swordfish catch– a 53-incher that weighed about 75 pounds. It wasn’t a cinch, coming just after 3 p.m. following two incomplete bites. But it demonstrated Nick’s finely-honed instincts and absolute refusal to go home without a sword.

“We’re going to stay out here till we catch one,” he said firmly after the first two swings-and-misses.
It wasn’t like Zamora and his dad, sister and brother-in-law were going to go home without dinner; they already had boated a dozen schoolie dolphin to about ten pounds casting baits to a weed line in 660 feet of water. But it was the broadbill swordfish that they’d travelled more than 30 miles offshore to catch.

Arriving at a series of steep walls in the 1,400-foot-depth range, Stanczyk and Fulton deployed an outsized conventional reel with a Hooker electric motor on a short, stout rod. The fishing line had a 10-pound weight tied to a spur line — sort of a modified chicken rig like those used on headboats– and six feet of 250-pound leader. The bait was an American eel decorated with a plastic squid skirt.

“Durable, tough and good action,” Stanczyk said of the unusual bait. “It can take abuse and you get multiple shots to try to hook them before they destroy the bait.”

Once the bait had hit bottom, Stanczyk bumped the Broad Minded in and out of gear to keep the fishing line straight up and down. He watched the rod tip carefully for a bite telegraphed from way down below.

For about ten minutes, nothing at all happened. But suddenly the rod tip flicked up and down about a half-inch– like you’d expect a pinfish to bite a light bait rod.

“That was a good bite,” the captain said. He really thumped it good. We keep moving [the line] up and down and he keeps whacking it, but he hasn’t eaten it yet.”

Can you tell all that from a half-inch movement of the rod tip,” someone asked.

Stanczyk nodded, then a minute later added: “Good news is, we had a bite; bad news is we didn’t catch him. At least one’s down there.”

Zamora engaged the electric reel and after a few minutes, the crew retrieved the eel. Sure enough, it’s body was scraped up and the heavy leader was chafed.

After a couple more drifts with no joy, the Broad Minded got a hit using a chicken dolphin plug for bait in about 1,700 feet of water. Unfortunately the fish came off.

“I think he was hooked somewhere in the body other than the jaw,” Stanczyk theorized.
But the crew’s luck changed on the next drift about 200 feet from the previous bite in about 1,700 feet of water using a smaller bonito strip for bait.

Eying the rod tip, Stanczyk suddenly directed Zamora to get back on the rod.

“It’s coming up; he’s coming up!” the captain said excitedly. “Let’s get this one!”

Zamora pushed the buttons as everyone waited breathlessly to see what was coming. After a tense couple of minutes, a chunky silver shape with an outsized head and really long bill rose to the surface and made a small leap beside the boat: at last, a swordfish!

Stanczyk and Fulton stuck it with two large gaffs and lifted it into the boat: steaks and kabobs for all to celebrate Zamora’s birthday.

And the Broad Minded went on to catch a sword on each of the next two days.