GEORGE TOWN, GRAND CAYMAN—DECEMBER 16, 2011— A groundswell of public support generated by Guy Harvey’s latest film The Mystery of the Grouper Moon has prompted the Marine Conservation Board of the Cayman Islands to extend a ban on fishing the Nassau grouper spawning aggregation site near Little Cayman.

The Board, this week, voted to extend the current moratorium another eight years after reviewing extensive research conducted by REEF (Reef Environmental Education Foundation) and Oregon State University and a public education campaign supported by the Guy Harvey Ocean Foundation (GHOF) and the Cayman Islands Department of Environment  (DOE). The existing ban, in place since 2003, was due to expire at the end of the year. The penalty for catching Nassau grouper in a spawning aggregation site between November and March is up to one year in prison or up to $500,000 in fines.

“The Cayman Islands are celebrating the 25 anniversary since the formation of the first marine park here, so it is fitting that such a strong conservation effort has been made by the MCB and that common sense has prevailed,” said Dr. Harvey.

In filming the research work being conducted by REEF, Guy Harvey and award-winning filmmaker George Schellenger created a compelling and informative 45-minute documentary—The Mystery of the Grouper Moon (click here for a preview).  The film’s purpose was to document the research and make the results available in layman’s language to the residents of the Cayman Islands. The documentary was shot entirely in the Cayman Islands and was supported by REEF and the DOE. The GHOF also supported the education campaign with custom artwork.

More work needs to be done, according to Dr. Harvey, who makes his home in the Cayman Islands.

“We are all very glad that the Marine Conservation Board has acted positively on the research conducted by REEF and the DOE, as the science clearly shows the recovery of Nassau groupers has not been as successful as expected,” said Dr. Harvey. “This is because fishing for this species still continues during the spawning season, but outside of the protected spawning aggregation sites.”

The Nassau grouper population, according to Dr. Harvey, has maintained equilibrium and has not grown appreciably.  Harvey says the next step is for the Ministry of the Environment to legislate protection of Nassau grouper throughout its range during spawning season, between November 1 and March 31.

“This would be similar to the protection enjoyed by conch and lobster populations which remain healthy in the Cayman Islands, but are fished for only during short seasons each year,” he said. “Also the minimum catch size of the Nassau grouper needs to be extended from 12 inches to 24 inches.  It is good fishery management to let fish reproduce before they are harvested.  A 12 inch fish is immature.”

An added advantage to keeping groupers at a healthy population is that they can serve as a natural culling force on the invasive, non-native lionfish, which are annihilating several species of juvenile reef fish throughout the Caribbean.

“Local fishermen need to realize that these conservation measures will benefit all user groups in the years to come,” Dr. Harvey concluded.  “Once the Nassau grouper population recovers it can then be managed and fished within the restrictions of new catch limits, but the spawning brood stock must be protected forever.”

Fred Garth, Editor-in-Chief of Guy Harvey Magazine, caught this 11.2 pound bonefish off the West End of Grand Bahama on January 6, 2013, while fly fishing out of the Old Bahama Bay club with fishing guide … 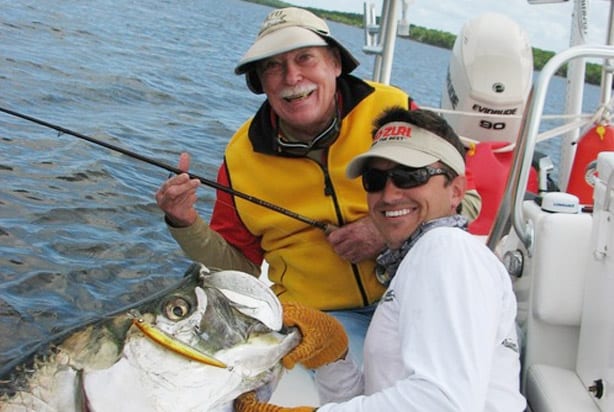 A little over one year ago at the 2015 Miami International Boat Show, a handful of luminaries from the sport fishing industry, including Dr. Guy Harvey, assembled in a meeting hall to roast Stu Apte– …